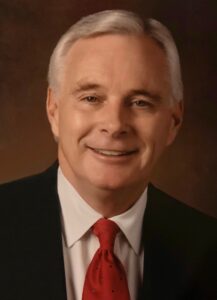 Barry was born in Wichita Falls, Texas on June 28, 1946 to Joni and Walter “Pete” Peterson. Shortly thereafter the family moved to Sandwich, IL while his father was deployed as a B-17 pilot in the Air Force. The family stayed there until Barry was four, when his father was killed in the Korean Conflict, after which they moved to Amarillo, Texas. He then moved to Pampa, Texas after his mother’s remarriage, where he spent the remainder of his childhood. Barry graduated from Pampa High School in 1964, from Texas Tech University in 1968 with a Bachelor of Arts in Architecture, and from St. Mary’s University where he earned his doctorate in Jurisprudence in 1972. In 1970 he married Patricia Swartz, of San Antonio and together they had two children, Shelbi Peterson Whittenburg, and Barry Peterson, Jr. In 1972 he moved to Amarillo where he began his law career at Stokes, Carnahan, & Fields. Pat and Barry divorced in 1981. Barry met Tisha O’Neill Ware in 2001 and married her in 2004.

Barry excelled at law, consistently earning many accolades throughout his fifty-year career as a civil defense trial attorney, eventually becoming senior partner of his firm, Peterson, Farris, and partners. Multiple times he was recognized as one of the top 100 attorneys in the state of Texas. Barry was a founding partner of the Texas Young Lawyers Association, member of the Texas Association of Defense Counsel, Texas Bar Association, American Bar Association, and many other law-related organizations, serving presidential terms of most. Barry’s extensive civic involvement encompassed either serving as a board member, or as president of Tealwood Lakes, The Amarillo Symphony, The Golden Spread Counsel of the Boy Scouts of America, The Harrington Cancer Center, the Amarillo Botanical Gardens, The Lonestar Ballet, Amarillo Country Club, The Palo Duro Club, The Amarillo Club, The Citadelle Art Foundation and The Kiwanis Club.

Barry was a deeply compassionate servant of God. His generosity and spirit touched the heart of every person he encountered. He was a member of First Baptist Church of Amarillo, Texas where he served as deacon. He lovingly gave to the church by serving on numerous committees which included serving as chairman of both the restoration and landscape addition projects. He taught, and shared a cherished bond with, the ladies of Adult 8 “The Peterson Class”.

Throughout his life, Barry pursued many hobbies which include oil painting, gardening, sailing, fishing, backpacking, antique cars, decorating and remodeling houses, and piano. He had many hidden talents which included the ability to drive a tractor and steam train. He was quite a baker; you can ask the ladies of Adult 8.

He loved everyone unconditionally.

or Heal the City