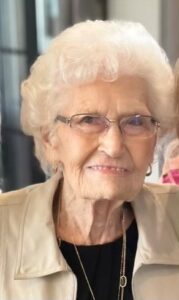 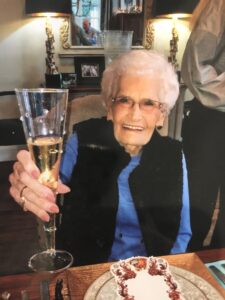 Proverbs 31:26 “She opens her mouth with wisdom and the teaching of kindness is on her tongue.”

Bettye Jo Kendall Hagans, 98, of Amarillo, TX surrounded by her family met her Lord and Savior on March 29, 2022.

She was born in Hereford, TX on December 11, 1923, to Velma Lance and Joseph Roscoe Kendall who came to the area via covered wagon. She grew up in Hereford, TX, and graduated from Hereford High School in 1942. She attended Texas Women’s University where she and others were bused to Texas A&M to be in the movie, “We’ve Never Been Licked”, which was filmed in 1943.

On September 25, 1943, Bettye married Preston E. Hagans. Bettye and “Red” were married for 67 years and made their home in Hereford, TX, where they owned and operated restaurants such as Delano, Dairy Cream, and Pizza Hut. Bettye was a member of Beta Sigma Phi, played the piano at Temple Baptist Church, was a member of a Bridge Club, and a monthly dinner club that included dancing in Amarillo at the Nat on Sixth Street. Bettye and Red loved to travel and holidays at their house were special.

In 1972, Bettye and Red moved their family to Cleburne, TX where they built a Pizza Hut franchise and had many friends. In 2006, they moved back to Amarillo, TX.

Bettye believed “Nothing learned is ever wasted.”

Although Bettye was small in stature, her life was full of her love for God and love for her family.

Bettye was preceded in death by her parents; her sister, Geraldine Bainum; and her beloved husband, Red who passed away in 2010.

In lieu of flowers, the family wishes for memorial contributions to be made to the Bettye Hagans Memorial Account at Amarillo National Bank. Donations can be made at any branch.