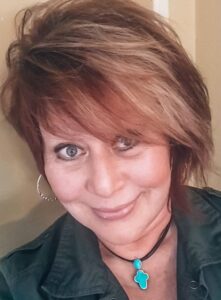 Updated with Service Information:
Bobbi Lynn Hukins, 58, of Duncan, OK went to her heavenly home on February 21, 2022. She was born to Robert Albert Baker and Mildred Mae Boling on June 20, 1963, in Long Beach, CA.
Her family moved multiple times in her early childhood which led to her developing a spirit of adaptability in new situations and the ability to make friends wherever she went. She took her role as “big sister” to Robin and Kathy very seriously and looked out for them at all times. Summers were spent with extended family at the lake or visiting her grandparents and cousins in Ohio and Pennsylvania. These memories were precious to her and she put forth an abundance of effort to preserve the family ties and keep everyone connected throughout her life.
By 6th grade, her family settled down in Hobbs, NM. She developed a talent for writing poetry and contributed to her school newspapers in the journalism department. While attending Hobbs High School, she met Brady Hukins. They became inseparable, quickly fell in love, and married in 1980. Together they had one son, Brady Hukins, Jr. She devoted her time to being a supportive wife and mother. She never tired of the times she could watch her son play baseball and football and spoke endlessly of how proud she was to be his mother! This spirit of selflessness was consistently evident in her life as we observed her adoration for her only granddaughter, Dawsyn. The times that she devoted to being a “Gram” were some of her favorites.
Bobbi always had a desire to learn new things. She embarked on several paths in retail, worked as a realtor’s assistant to her mother, served as a receptionist and obtained a certification in analyzing medical tests. After moving to the Canyon/Amarillo area, she and Brady, Sr. felt called to pursue God’s plan and embark on a path of Christian outreach, devoting their time to the pastoral leadership of their church. It was here that Bobbi bloomed as she ministered to the needs of others. Their ministry was cut short by her husband’s terminal illness but her role shifted to loving caretaker until his death.
Bobbi chose to start a new chapter of her life in Ruidoso, NM where she could be closer to her granddaughter. Her fun loving attitude and heart for others led her to make deep friendships at the Sacred Grounds Coffee House. She spent time enjoying live music and the beauty of nature while her family and friends watched her find her youth again. It was during this time that she met the second love of her life, Mike McMasters. Their days together in Duncan, OK were filled with enjoying the outdoors, listening to music, cooking together, and renewing deep family connections. The experience of finding love again gave her a renewed sense of joy in life!
Bobbi will be remembered for the smiles she put on our faces, her sense of humor, her love for Jesus, her unselfish spirit, and a love and devotion for others that knew no boundaries
She is survived by her son, Brady Hukins, Jr., of Amarillo, TX; granddaughter, Dawsyn Hukins, of Amarillo, TX; sisters, Robin Karrh and husband Gary, of Amarillo, TX, and Kathy Botkin, of Lakewood, CO; longtime companion, Mike McMasters, of Duncan, OK; Mike’s sister, Brenda Overstreet and her husband Ocie Bob, of Duncan, OK; sisters-in-law, Pam Turner, and Karen Owens and her husband James, both of Hobbs, NM; brother-in-law, Joe Hukins and wife Cheri, of Hobbs, NM; and many aunts, uncles, cousins, nieces and nephews on both sides of the family who loved her very much!
She was preceded in death by her parents, and her husband, Brady Hukins, Sr.
A Celebration of Life will be held in the Boxwell Brothers Ivy Chapel in Amarillo, TX on Friday, April 29, 2022, at 2:00 p.m.
The family requests that those wishing to make memorials in honor of Bobbi do so by donating to the American Heart Association.
Please use this link to view the service: https://www.youtube.com/watch?v=0tqU8mGxFOc