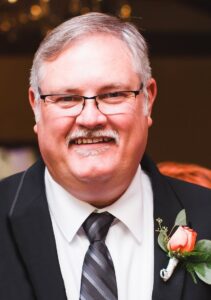 Charlie Lynn Strawn was born June 9th, 1962, in Friona, Texas, to Jerry and Kay Strawn. He spent his childhood working on the family farm just west of Panhandle, Tx. After graduating from Panhandle High School, Charlie continued his academic pursuits at Texas Tech. During his time in Lubbock, he met and married the love of his life, Millie Feldman. Early in their marriage, they returned to Panhandle, where Charlie began his 35-year career at Tyson foods starting as an electrician before working his way up to becoming an HR manager. In 1997, he moved his family to Claude, where they raised four children and a small used car lot. In his spare time, his skills and work ethic combined with his passion for cars led to a lifelong joy of auto repair and restoration. He served his community by coaching several youth sports, being a parent leader in FCA, serving on the Claude ISD school board, and as a lay leader of the United Methodist Church. Charlie was a collector of various hobbies ranging from guitars, cars, cooking, guns, puns, and fountain pens. But nothing was of more importance to Charlie than his faith in God, his love of family, and his service to the community. He was a big man with an even bigger heart whose presence could fill any room. His quick wit and humor ensured he never met a stranger.  He had the wisdom of knowing when to listen and when to talk….and talk…and talk. His patient demeanor, calming presence, and Papa bear hugs will be missed.

Charlie is survived by his wife of 34 years, Millie Strawn; his children, Melissa and Hunter Shelley, Jerry and Sheridan Strawn, Dixi Strawn and Dan Villegas, and Charles Strawn; one grandchild, Patrick Shelley; his parents, Jerry and Kay Strawn; and his siblings, Mike and Joan Strawn, and Karen Strawn.