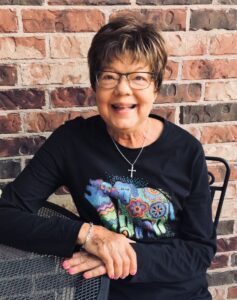 Cheryl was born on May 10, 1956, in Albert Lea, Minnesota to DeBIom and Gayle Gullord. She was raised in Bricelyn, Minnesota and graduated from Bricelyn High School in 1974.

She attended college in Faribault, Minnesota where she earned a degree and worked as a Lab Technician in Mankato, Minnesota.

Her family moved from Minnesota to Texas in 1977. On February 5, 1982, she married Brad
Grice in Dalhart, Texas. They had two daughters, Charlsey and Callie. Cheryl had many dear friends and enjoyed baking for others, sewing, making jewelry, and singing. She had a steadfast faith and was very involved in her local church in Dalhart.

In 2012, she moved to Amarillo, Texas. She was a member at Encounter Church and loved volunteering at the Harrington Cancer Center.

She is survived by her mother, Gayle Gullord of Amarillo; two daughters, Charlsey and her husband Kim Forbess and granddaughters Emma and Abbigayle of Wichita Falls, Texas, and Callie Grice of Dallas, Texas; three sisters, Mary and her husband Dan Olson of Joshua, Texas, DeAnne and her husband Ricky King of Amarillo, and Kathryn Gullord of Dallas, Texas; and a brother, Charles Gullord and his wife Debra of Visalia, California. She is also survived by nieces and nephews, Mike Olson and wife Emily, Brett Olson and wife Taylor, Kay Leigh Verissimo and husband Derek, Candice Whitaker and husband Chris, AJ King and wife Haley, Aaron King, and Connor King.

She is preceded in death by her father, DeBlom Gullord.