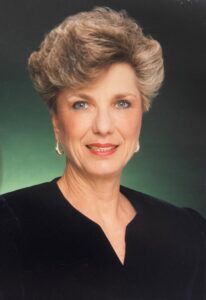 Services for Diana Stafford will be at 2:00 P.M., Saturday, February 5, 2022, at St. Andrew’s Episcopal Church, 1601 Georgia St., Amarillo, Texas 79102. Private burial will be at Llano Cemetery. We invite friends to visit with the family after the memorial service at St. Andrew’s Episcopal Church Parish Hall. In lieu of flowers, memorial donations may be sent to the Alzheimer’s Association, or BSA Hospice of the Southwest.

Diana married Bobby Loyd Stafford, MD, in Lubbock, TX on December 19, 1958. Together they had three children, Greg, Gwen, and Cheryl.

Diana was a member of St. Andrew’s Episcopal Church in Amarillo, TX. Her hobbies included tennis, golf, skiing, and traveling.

Diana described herself as a professional volunteer. She raised a significant amount of money for our community. Her community involvement included but was not limited to:

She was preceded in death by her loving husband, Bobby Loyd Stafford, MD.