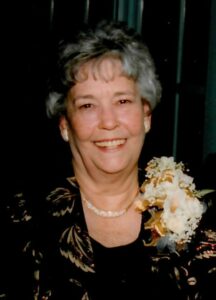 Services will be at 11:00 A.M. Friday, January 17, 2020 at the Memorial Park East Mausoleum. Arrangements are by Boxwell Brothers Funeral Directors.

Donna was born in Amarillo, Texas on May 3rd, 1935, to Ozo and Omega (Huskey) Palmer, where she grew up and spent most of her life. She married Leonard Marchbanks on October 24th, 1952, and together they had three children, who gave them four grandchildren, and eight great-grandchildren.

Having a special needs daughter inspired Donna to lobby for, and organize the first handicap school in Amarillo, Texas in the sixties. Donna and her husband Leonard have been committed to providing the best love and care for their special need’s daughter, Sharon Gail, for the last 67 years in their home.

Donna was an avid seamstress, making a lot of clothes for her children during their adolescent years, including all formals for her daughter throughout her junior and high school events and functions.

She was the volunteer room mother for her children throughout their elementary school years and chaperoned her daughter and seven other cheerleaders on a cheerleading competition trip to SMU in Dallas Texas. She was a true example of a loving and caring mother with a moto of “God, my children and family come first.”

Donna and husband Leonard also coached the softball and track teams of their children while they were growing up.

She had a love of painting for family and friends. She was on a family bowling league with her mother and aunts and was also a square dancer and member of the Pairs and Squares Dance Club in addition to doing exhibition round dancing and teaching with her husband, Leonard. She and Leonard owned and operated Arlene’s Square Dance Shop in Amarillo for 8 years.

Donna also had a passion for cooking and preparing meals; she wrote a family cookbook of her various favorite recipes.

Donna was preceded in death by her brothers, Bill Palmer of Amarillo, and Sidney Palmer of Cuchara, Colorado.