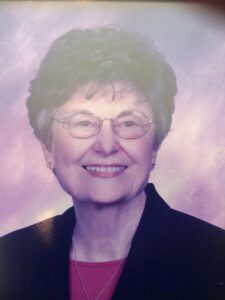 Dorothy Wolfe, 87, of Amarillo, TX passed away peacefully on Friday, May 8, 2020, from the complications of a massive stroke suffered on May 1.

She was born in rural Brown County, TX in 1932 to Vivian (Barnes) and William C. Taylor.  Childhood was spent in Abilene, TX and Lubbock, TX with her parents and younger brothers, James and William (Jr.)

While attending Midwestern University in Wichita Falls, TX, she met and married Billy Wolfe, who she was with until his death in 2014.

A long-time resident of Amarillo, Dorothy was active in her husband’s construction business and the Polk Street United Methodist Church.  She was also known as an excellent bridge player, competing in and winning several tournaments.

Dorothy is survived by her son, Mark, his wife Amy, grandchild Cece and her brothers, James and William.   Her grandson, Colin, was killed in service to our country in Iraq in 2006.

Due to the COVID19 restrictions, a public service is not planned.