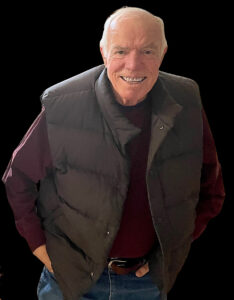 At the age of  84, beloved father, grandfather, brother and friend to all, Dr. Arthur Leroy Baer Jr. (A.L. Baer) left this Earth and was welcomed into the loving arms of Christ. He was born in Dumas on October 10, 1937 and passed away in Dumas on April 28, 2022. He was a lifelong champion for his community where he had thousands of friends and some extended family members still living.

A.L. attended Dumas High School where he ran the 880 in track and set a state record in the mile relay. He achieved Eagle Scout status and spent summers leading backpacking trips out of Philmont Scout Ranch near Cimarron, NM. Following graduation in 1956, he attended Texas Tech University where he also ran track, was a member of Phi Gamma Delta and the Saddle Tramps. He graduated in the honors program in 1960. He then completed his Doctor of Dental Surgery degree at the University of Texas in Houston in 1964 and received the outstanding undergraduate award in periodontics.

Following graduation from dental school, A.L. joined the United States Army Dental Corps. He served two years as a captain with the 101st Airborne Division from 1964-1966, one year as a periodontist and one year in a rotating internship of operative dentistry in Ft. Campbell, KY.

In 1966, Dr. Baer returned to his hometown of Dumas, Texas to start a family and open his dental practice. His goal was to treat his patients the way he wanted to be treated and he carried out this philosophy by informing his patients of their treatment options and only treating patients for work that was necessary to their dental health, always putting his philosophy ahead of profit.

Dr. Baer had three children, Trey Baer, Kristi Baer Stanford and Bret Baer, and nine grandchildren, Jordan, Bailee, Sydney, Sills, Jewel, Ayla, Jackson, Addison and Claire. Above all, Dr. Baer was devoted to his family, spending any time not in the office in support of those he loved. From the time his children were small until just weeks prior to his passing, Dr. Baer attended every single performance, competition, game, meet, and all large and small events to cheer on his children and grandchildren. He was lovingly adored by every one of his 12 descendants.

Serving the community where he lived his entire life was also important to Dr. Baer. He was a co-founder of the Dumas Satellite School under MHMR, a 50-plus-year member of the Dumas Noon Lions, a member of the Masonic Lodge, past president of the Golden Spread Scottish Rite Association, and was also a leader or member in a multitude of additional organizations including the Dumas Meals on Wheels, the Dumas flag design committee, the recycling program and the Arts Council. He volunteered his services on numerous mission trips to Los Alamos, Mexico with the First Baptist Church. Dr. Baer was also very active for almost two decades in local Relay for Life events benefitting the American Cancer Society.

Dr. Baer first served as Secretary/Treasurer and later as President-Elect Chief of Medical Staff for the Dumas Memorial Hospital. He served the Moore County medical community for 46 years before he retired his dental practice. He received the 50-Year Award from the Texas Dental Association in 2014.

Though he would never call himself an artist, Dr. Baer enjoyed creating artistic crafts for his family and home in a variety of mediums including wood, leather, paint, fabrics and photography.

Accolades aside, Dr. Baer will be most remembered for his warm, loving and cheerful demeanor. Whether meeting someone new or encountering a lifelong friend, Dr. Baer never missed the opportunity to bestow kindness, a smile, a hug, listen or entertain with storytelling. Strangers became fast friends. He was beyond generous with his time, knowledge, and resources, always putting others ahead of himself.

Having valiantly and stubbornly beat cancer for 24 years, Dr. Baer ended the battle on his own terms. He decided it was time to go home, rest and reunite with his parents and brother in Heaven. He took his final breath within a week of that decision. His last days were spent at home surrounded by his children and grandchildren. There was prayer, laughter, tears, and, of course, storytelling.

Dr. Baer taught us all that humility, selflessness and small acts of kindness can grow into a larger-than-life legacy of love.

In addition to his three children and nine grandchildren, Dr. Baer is survived by daughters-in-law Jennifer Baer and Alexis Baer, his sister Charlyn Baker and sister-in-law Peggy Baer as well as multiple extended family members. He was preceded in death by his parents Arthur and Christine Baer, his brother Duwain Baer and brother-in-law, Stanley Baker.

Always one to joke and laugh, for decades Dr. Baer always replied “free beer and bar-b-que” when asked what type of service he would someday want. The family will have a memorial celebration of life for Dr. A.L. Baer to be held this coming Tuesday, May 10, 2022, at 4:00 pm at the First Christian Church in Dumas, Texas. All friends of Dr. Baer are invited to attend. Memorial donations are requested to go to the American Cancer Society or the Philmont Scout Ranch.   Arrangements are by Boxwell Brothers of Dumas, 500 N. Maddox Ave, Dumas.