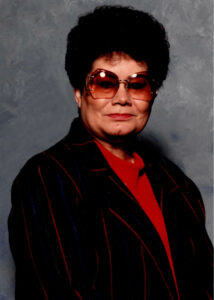 Earline was born on February 4, 1935 in Amarillo to Lena and William Handley. She graduated from St. Mary’s Academy in 1953 and then went on to work as a telephone operator. She loved sports and was gifted at speed roller skating competitions and women’s softball. She earned the nickname of speedy at the skating rink, which unfortunately carried over when she bought her brand new 1956 black and white Chevrolet Bel Air. She was the first female to coach a boys’ softball team for Kids Inc. Earline was a big Dallas Cowboys fan and had season tickets during their glory days. She personally kept score of over forty years of world series baseball games. Earline loved watching the Rangers after years of being a Yankee fan.

Earline married Bob Morris and together they raised five children, Mark, Janie, Dean, Melody, and Patty. Later on, she worked as a bookkeeper for their family business. They enjoyed going to family reunions at the XIT Rodeo in Dalhart, and other reunions in New Mexico. She and Bob enjoyed going to Branson on several occasions. After retirement she enjoyed playing Bunco and Mexican Train with groups of ladies and friends. She was also a member of the Red Hat Society, Sparkling O’ld Red Hatters (please wear your hats).

She was preceded in death by her parents; husband, Bob Morris; son, Mark Morris; and brother, Tony Handley.

Thanks to the caregivers and the Landers for Earline’s care and that of her chihuahua, Chiquita.