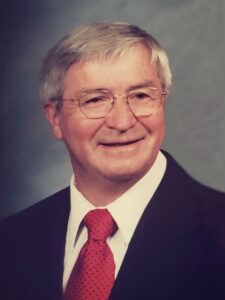 A memorial service for family will be at 2:00 pm, Saturday, February 22, 2020, at Boxwell Brothers Ivy Chapel, 2800 Paramount Blvd, with Dr. G. A. Roach officiating. Arrangements are by Boxwell Brothers Funeral Directors, Amarillo. Family will have fellowship following the service at 5:30 pm at the Firefighters Union Hall, 613 SE 46th. BYOB and make sure to bring all your favorite memories of Ernie.

Ernie was born in Hollis, Oklahoma to Joseph and Sfrona Munkres on December 2, 1935. He attended and graduated from Dumas High School, and spent much of his time there playing basketball and participating in other sports.  Ernie also had a love for music.  He was a member of a band called “The Amazing Rhythm Orchids.” Members of the band included Jim Bowen and Donnie Lanier. Ernie’s time with the band was cut short when he joined the United States Army, where he served his country for two years.

Ernie married Bettie Lou Emerson on January 27, 1956. They moved to Amarillo, and Ernie started working at Pioneer Natural Gas. While working there, he worked multiple side jobs to support his family. He then started working at BNSF where he retired. During his early career, he volunteered many hours to both the church and Kids Incorporated.

Ernie never met a stranger. He loved people and everyone was his friend. Ernie had a love of simple photography. We will forever have so many memories captured in his photographs. His hobbies also include fishing and golfing with friends and family.

He loved and was loved by all of his nieces and nephews and all of their families. He was everyone’s favorite “Uncle Ernie”. He was adored by his whole family.

Ernie was preceded in death by his wife Bettie Lou Munkres, his beloved mother and father, and his siblings, Homer, Ralph, Debbie, and Joy.