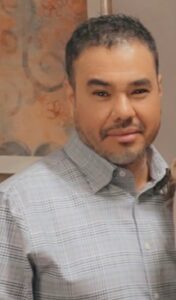 Funeral services will be at 11:00 A.M., Friday, February 25, 2022, in the Boxwell Brothers Ivy Chapel with Dr. G. A. Roach officiating. Arrangements are by Boxwell Brothers Funeral Directors, 2800 Paramount Blvd.

Felipe was born on March 11, 1974, in Dumas, TX, to Felipe Sr. and Coty Dominguez. He graduated from Gruver High School in 1992. He then continued his education and graduated from Texas Tech University of Lubbock, Texas in 1997. After graduating, Felipe took a position at Cargill, where he worked in HR and grain for over 20 years. In 2016, he joined AGP, later transferring to Lincoln, NE as the Director of Employee Relations.

Felipe is survived by his wife of 22 years, Chayci (Shaver) Dominguez, of Lincoln, NE; his two children, Kreisun (Dominguez) Caywood and husband Lee, of Farwell, TX; his son, Sloan Dominguez, of Amarillo, TX. Felipe A.K.A. “Fepe” also is survived by his one granddaughter, Kaislee Mae Caywood; his parents, Felipe and Coty Dominguez; four sisters; and many nieces, nephews, great-nieces, great-nephews, and cousins.

Please use this link to view the funeral via livestream: https://www.facebook.com/BoxwellBrothersFuneralDire…/live/