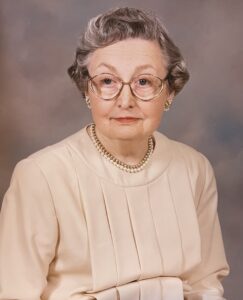 Georgia Ruth Haliburton of Vega passed away on April 24th, 2022, at the age of 96. She was born on a farm in Oldham County on June 16, 1925, to John and Lydia Haliburton. At the time of her death, she was the oldest living native-born Oldham County resident still residing in Vega. Ruth was always willing to share her vivid, detailed memories of Vega and her family’s history in Oldham County.

Ruth graduated from Vega High School in 1942 and attended West Texas State College. She began her career in banking at First State Bank in Vega in the summer of 1943 and continued for over 50 years. She was a member of the American Women’s Banking Association.

Her service at Vega United Methodist Church began at an early age and included teaching children’s Sunday School for many years, serving on various committees, and dedication to United Methodist Women. She served at the Wesley Community Center in Amarillo. Ruth was a member of the Order of the Eastern Star and a long-time member and officer of Memorial Park Cemetery Association. She was honored as Oldham County Citizen of the year and was a proud conservative Oldham County Democrat.