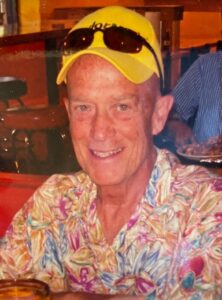 Jack Thomas “Tom” Woodward went to his eternal home on September 14, 2022.  As a believer our goal upon our final day is to hear “well done good and faithful servant.” And to do that the formula is simple; do the best with what you have been given.

Celebration of life will be on Thursday, November 3, 2022, at 1:00 p.m., in the Boxwell Brothers Ivy Chapel, 2800 Paramount Blvd. Arrangements are by Boxwell Brothers Funeral Directors of Amarillo.

Tom was born February 28, 1945, to Pauline Guynes Wilson and Jack Green Woodward. Tom graduated from Tascosa High School in 1963. He then attended and graduated from Texas Tech University with a Bachelor of Business Administration and Architecture. He was a member of the ROTC and served his Country in the US Army, earning the rank of 2nd Lieutenant and received the National defense service medal. He served until his second child was born. He later received his Master’s in Theology from Southern Methodist University and served as a Pastor in the United Methodist Church for 29 years. Tom then moved on to work in the Texas Department of Criminal Justice for 9 years until his retirement.

Tom’s interests were as diverse and in depth as the West Texas sunsets and when he went, he went all in. From music and art, karate, scuba diving, many collectibles to photography – especially at every sporting event his kids participated.  Tom was also passionate about horses and rodeos he volunteered at the equestrian center. He learned this at a young age while helping his grandad at the 6666 Ranch.  Another of Tom’s loves – Texas Tech University was always on his mind. Tom loved traveling, especially to practice scuba photography, and got to create many memories the last years of his life with his sister Judy and beloved nephew Barry during these trips.

Tom was preceded in death by his parent Pauline Wilson and Jack Woodward, his sister Judy Hofmann and his daughter Megan Woodward Gillispie. Survivors include his wife Sandra Woodward of Amarillo, daughter Brandie Rackler of Lubbock and son Trent Woodward and wife Tara of Austin as well as sister-in-law Sharon Mc Donald of Amarillo, eight grandchildren and one great grandchild on the way which he was so excited about and referred to him as Lil Bo.

Well done good and faithful servant; you did the best with what you had been given. Thank you for the laughter and the memories you will be missed by many. Go soar with the eagles.

Memorial donations can be made in Tom’s name to the Horse Refuge Service, P.O. Box 53684, Lubbock, Texas 79453, or visit www.refugeservices.org.

Please use this link to view the service: https://www.youtube.com/watch?v=8ZIu_khpe6I