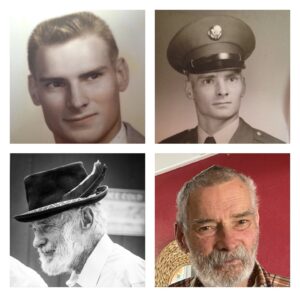 Jerald Lee Munson, 81,  passed away peacefully at his home in Channing, TX on June 23, 2022. A celebration of life service will be held at a later date. Jerald, fondly known by all as Jerry, was born May 10, 1941, in Peabody Kansas to Benjamin Joseph Munson and Rosalyn Mae DuBois.

In his youth, with his father and younger brother, he moved to Dumas Texas where he assisted his dad in building many residential and commercial structures. Of note the Stalwitz ranch house and other businesses that line the main thoroughfare in Dumas, TX.

After graduating from Dumas High School, he proudly served in the US Army for two years stationed in Hawaii & Washington State. While serving at Joint Base Fort Lewis- McChord, he met the love of his life, Clovis Shirley Munson. Upon his honorable discharge in 1965, he harnessed his power of persuasion and convinced Clovis to relocate from the green and mountainous terrain of Washington State to the treeless flatlands of the Texas Panhandle. There they settled in Dumas, Texas, and married in March of 1965.

Jerry continued his trade as a builder and contractor, purchasing and renovating/selling residential properties well before the concept of “flipping” houses was cool! Often a man with a plan well before his time. It was during this time he was awarded a contract to construct the new obstetrics wing for Dumas Memorial Hospital at which his girls were the first set of twins to be born in 1966.

His unique eye for designing and building brought he and his young family to Amarillo where he worked for several years as a building superintendent for other general contractors. There he and Clovis added a final addition to their family with the birth of their son Michael Joseph. Clovis’ love of the mountains and trees never waned and she was able to convince Jerry to relocate to the Sierra Grande mountain region of New Mexico. There they resided for several years and while in this area they became involved in the local Emmaus community. Through this involvement, he and Clovis were offered the opportunity to manage a newly constructed Christian retreat center outside of Dumas called New Beginnings. Another move back to the Texas Panhandle ensued and they served as managers at New Beginnings for several years.

Jerry and Clovis touched and were touched by many lives while at New Beginnings. It was at this time in his life that Jerry grew his faith and relationship with Jesus and was baptized at Pleasant Valley Christian Church. Jerry served as lay master for several men’s walks and participated in many men’s retreats, further influencing others and growing his faith.

Ever on the lookout for opportunities to build and develop, Jerry purchased land in Channing, TX where he initially built two small workshops. He and Clovis later built and created a home on this property in which they resided for over twenty years until her death in 2018.

After having been self-employed for thirty-plus years, Jerry realized the importance and benefits of a retirement plan. He went to work for TDCJ as a corrections officer and maintenance supervisor, serving at the unit in Dalhart, TX. He officially retired after 10 years of employment/service.

Jerry had been an avid collector of many antiques. He especially enjoyed the pursuit and acquisition of black powder rifles and mountain man regalia. He also had an affinity and an eye for finding cast iron and other items from the early turn of the century pioneer days, amassing an impressive collection. With one or more young grandsons in town, he attended several mountain man rendezvous in New Mexico and Colorado.

He loved the art of antique picking and reveled in the thrill of finding unique items to restore and display.

His final building design was a Chapel built on the family property in Channing, Texas where he will be placed to rest alongside his wife and son.

Jerry was preceded in death by his wife of 52 years, Clovis Munson; his son Michael Joseph Munson; a brother, John; and a sister, Sheila. Those left to treasure his memories are his twin daughters, Janine Messenger of Channing, and Jeri Tyler with husband Jerrel of Bushland; his sisters, Tessie, and Deanie (spouse Ray) of Alamogordo, NM; grandchildren, Ashlee Cordell, Chantry Cordell and Lauren Cameron, all of Amarillo, their spouses and four great-grandsons; numerous nephews and nieces; and cherished family friends.

One Reply to “Jerald Lee Munson”