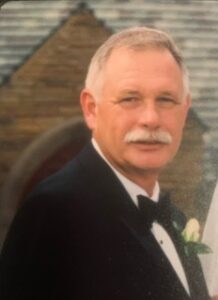 John James Olsen known as “Jack” of Amarillo, Texas was a caring husband father son brother uncle and the greatest Papi to his grandchildren. He left this world on August 11, 2022 at the age of 73.
Rosary will be said at 6:00 P.M., Thursday, August 18, 2022, in the Boxwell Brothers Ivy Chapel. Mass will be at 1:00 P.M., Friday, August 19, 2022, at St. Joseph’s Catholic Church. Followed by a burial at Llano Cemetery. Arrangements are by Boxwell Brothers Funeral Directors, 2800 Paramount Blvd.
John was the second child born to John and Beatrice Olsen on April 6, 1949 in Kew Gardens, New York. He grew up in a full house with two sisters Patty and Christine and one brother Ricky. After his high school graduation he joined the Marine Corps and served in the Vietnam War.
After he was honorably discharged from the Marine Corp; he came home and met the most beautiful woman he had ever seen, Helen. Jack spent a few months dating Helen before asking her to marry him. They welcomed their first child Kathleen a very short time later and moved to a little house on Long Island, New York. Three years later they welcomed their son John Michael, and the next year another daughter Stacey. In those early years he worked full time at AT&T, then to a second job at a full service gas station. Helen would bring his dinner and babies up to the gas station to visit him every evening. He would eat and visit with his children, while she would attend to the customers. When times got tough he would pick up a third job overnight unpacking trucks, and getting paid in diapers to bring home for his babies. He worked three jobs at a time to allow Helen to stay home and raise his babies; he did so happily and without complaint knowing that the love of his life and soul mate was at home raising his children. Jack and Helen adored each other; they did everything together and loved the family they had created together. It was often observed that Jack settled and seemed to breath easier when Helen walked back in the room. They were hopelessly devoted to each other and their love was incredible to witness.
All Jacks dreams came true with the family he and Helen created. Jack was a family first man, the head of the dinner table father and spent his whole life loving one woman. He was a man of fierce loyalty and integrity. He was devout Catholic man and had a great faith in God. He prayed before each meal and did the very best to Honor God and his family. He spent his life showing up for his children, grandchildren and family at every event no matter how big or small. If he and Helen could make it, they would come. You could always count on him to lend a hand to his family, friend or really any person in need. Jack was an avid reader and was coined the Jack-of-All-Trades. He would find a way to fix or repair just about anything over the years and did not shy away from hard work. Jacks great love of Family often extended past blood relatives, he ended up fathering or mentoring his children’s friends. He never minded coming home to loud house full of family and friends. He loved having his children’s friends come over, and if they were taking a vacation he would pack the van full of his children and their friends and he and Helen would go. John never complained about anything, he had the greatest attitude ever bestowed upon a man by God. He was sweet and joyous in his life. He always said he was blessed to live in America, blessed to have fought for his country and most of all blessed by God to have found Helen. She was his reason for living. In the end, he hesitated to pass from this earth only because he did not want to leave Helen and his family. He passed away with Helen lying on his chest, only after she reassured him she would be okay in this life without him. I imagine he is waiting on a bench at the gates of Heaven and will wait patiently for Helen to arrive before going in.
He is survived by his wife of 47 years, Helen; his son, John Michael and his wife Brianna Olsen; and his daughter, Stacey, and husband Allen Rushing. Jack’s greatest joy in life was being Papi to John Alexander, Liam Conner, Scarlett Olsen, and Gabriella, and Olivia Rushing. He had two sisters, Patricia and husband Stan Olsen, and Christine and husband John Apollo, and his sister-in-law, Judy Caballero. His beloved nieces and nephews are Stan and wife Vanessa Olsen, Kelly Olsen, Jackie and husband Andrew Mroszczak, Elizabeth Felix, Nicole and husband Frank Siffert, John Apollo, Irene and husband Lazaro Castillo, Rita and husband Jamal Bernard, Lori and husband Nick Crowe, Jennifer and husband Craig Taddonio, and Melissa and husband Robert Scalera. His great-nieces and great-nephews are Michael and Maya Mroszczak, Lillian Felix, Kristopher & Megan Cabellero, Johnny, and Gino Pabon, Kamry, Stephanie, Jamaal Jr., Liam, and Maali Bernard, Rosalie and Delaney Crowe, CJ Taddonio, and Charlotte and Benjamin Scalera. Jack also loved his children’s friends that became family to him Lee Morrow, Trina Roeser, Lisa Richardson, Sherrill Herndon & Andy Nguyen.
He was preceded in death by his daughter, Kathleen Olsen; his parents, Beatrice and John V. Olsen; his mother and father-in-law, Rita and Israel Rivera; his brother, Richard Olsen; his brother-in-law, Jerry Caballero; and his Goddaughters child and sweet angel in heaven, Lyla Faith Crowe.