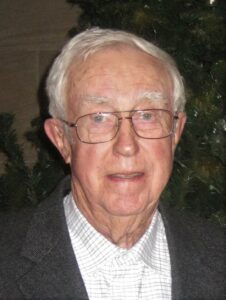 John was born in Bessemer, Alabama, but spent his childhood in McLean, Texas.  After high school graduation, he served in the United States Navy as an Electronic Technician’s Mate Third in San Diego, California, and Wahiawa, Oahu, Hawaii (Pearl Harbor) until his honorable discharge in 1947.  He then attended Texas Tech University and graduated with a Bachelor of Science degree in Electrical Engineering in 1950.   John moved to Amarillo and joined consulting engineer, Hollis Harris, forming the firm of Harris & Patterson.  He sold his half of the firm when he was seventy-five years old, but continued to work at the company until he was eighty-nine.  The company designed electric substations and transmission lines for Rural Electrification Associations’ (REA) Cooperatives in developing areas of Arizona, Texas, New Mexico, Utah and Oklahoma. His work brought telephone lines and electrical power to thousands of people in previously unserved areas throughout the Southwest.  He made a special, work-related trip to Tel Aviv, traveling to Israel to purchase a transformer for Trico Electric Cooperative, located in Tucson, Arizona.

The happiest moment of recognition came when he received a letter from his twelve-year-old grandson:

Thank you for being such a great role model for me.  You lived out your vocation and did your best as an engineer.  Your stories of work are amazing, and I hope to become an engineer as well.  Thank you.

John’s passion and dedication to his chosen profession left little time for recreation, but his favorite times of relaxation included fishing trips to Alaska and Canada, and walks with his faithful cocker spaniel. He was an active member of First Church of Christ, Scientist.

John was preceded in death by his parents, Homer Milton Patterson, Sue Fowler Patterson, daughter, Mary Katherine Patterson, and sisters, Catherine Phillips and Mary Alice Smith.  He is survived by Gwen, his wife of fifty-four years, their daughter, Jann, her husband, Eric, and grandson, Taylor.

The family thanks long-time friends. Elinor (Poppy) and Bill McCarty for their support and loyalty to John.

In lieu of flowers, the family requests memorial donations to a favorite charity.