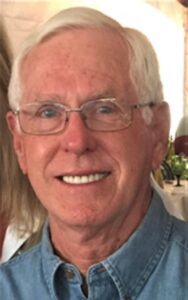 John Orville Colquitt, III left this world to join his lord and savior on Thursday, November 25, 2021.

A memorial service will be held at 2:00 pm on Saturday, December 4, 2021, at St. Andrew’s Episcopal Church with The Rev. Jo Roberts Craig officiating. Inurnment is in The St Andrew’s Columbarium Chapel immediately following the service, followed by a reception in the Fellowship Hall]

John O. (76) was born on September 29, 1945, in Phoenix, Arizona to John Orville (Bud) Colquitt, Jr, and Margaret Jones Colquitt. He moved to Dalhart at an early age. He graduated from Dalhart High School in 1964 where he excelled in both track and football. He was a pivotal player on Dalhart’s State Playoff run in 1963 (back when only 1 team from each district advanced).  He played safety and was an All-State wingback. He attended the University of Colorado and graduated from WTAMU in 1968.

John O. married his high school sweetheart, Carol Ann Robison. After graduation, John O. and Carol Ann returned to Dalhart where they raised their 3 daughters. John O. joined his father and grandfather in the family business they owned and operated from 1926 – 1983, the Dalhart Coca-Cola Bottling Co. Upon the sale of the company, John O. went to work for Amarillo Coca-Cola Bottling Co.

John O. moved his family to Dallas in 1985 where he was involved in a number of business ventures.  In 1987, the family returned to Dalhart where he took over the operation of one of his longtime ventures, Tri-County Equipment (John Deere Dealership). After becoming a motorcycle enthusiast, John O. opened an Indian Motorcycle Dealership in Dalhart and later opened a large showroom in Amarillo.

After the tragedy of 9/11, John O decided he wanted to help protect our nation. After training to become a US Air Marshall, he instead joined the Department of Homeland Security as a TSA officer. He retired when he turned 70.