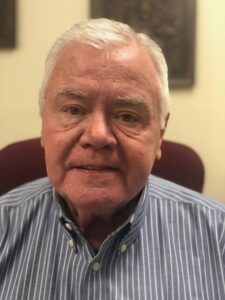 Joseph A. Dominguez, Jr., lovingly known as Joe, Pops, or Papaw, was a wonderful husband, father, grandfather, great-grandfather, and brother. At the time of his death, Joe was a youthful 81, living an active life. He lived in Amarillo and Fort Worth, Texas, and Pittsburgh, PA.
Joe passed away on Thursday, July 14, 2022, in Amarillo, Texas, from complications of a head injury.
Joe was born May 26, 1941, in Albuquerque, New Mexico.
He is preceded in death by his mother and father, Arthur B. Dominguez and Vera Hatjis Dominguez, his brother Charlie Dominguez and stepson, Michael Dan Wilson. Joe grew up in El Paso, Texas, in a Spanish Hacienda.
Joe married his love, Debbie Stovall Dominguez, and they had an incredible 42 years together. They enjoyed traveling the United States and other parts of the world.
Joe pursued his dream as an oil and gas landman most of his life, with a designation of a Registered Professional Landman with AAPL and a member of the International Right of Way Association. He also served as a real estate agent in the Amarillo community and was a member National Association of Realtors and the Texas Association of Realtors.
He is survived by his wife and beloved furbabies, Koko and Yankee; his three children, son, Dr. (Ret) LTC Joseph A. Dominguez III, married to Lowa Dominguez, son, Adrian Dominguez married to Lisa Dominguez, and daughter, Yvette Ayala, married to Angel Ayala; his grandchildren, Marissa Moore, Joseph A. Dominguez IV, Breanna Dominguez, Kendall Dominguez, Lauren Dominguez, Aidan Dominguez, Addison Dominguez, Drake Dominguez, Brittany Ayala, Emilee Ayala, Zachary Ayala, and Chaise Ayala; his great-grandchildren, Emanuel Moore, Ramia Moore, Austin Moore, Logan Ayala, and Abel Ayala; and his brother-in-law, Johnny Stovall.
Joe will always be known for his professionalism, integrity, kindness, generosity, forthrightness, intelligence, calm demeanor, respectful manner, and adventurous spirit. He loved watching his children, grandchildren, and great-grandchildren succeed in all their endeavors. He enjoyed watching conservative news outlets, sports of all kinds, especially the Dallas Cowboys, golf, and baseball. Joe enjoyed eating menudo on the weekends. Joe will be pleasantly and affectionately remembered by his many friends and colleagues.
A viewing will be at the Boxwell Brothers Funeral Home, 2800 Paramount, Amarillo, Texas 79109, on Sunday, July 17, 2022, from 4-6 P.M.
Services will be in the Boxwell Brothers Ivy Chapel on Monday, July 18, 2022, at 10:00 A.M. Graveside services will be at the Panhandle Cemetery, Panhandle, Texas, Monday, July 18, 2022, at 1:00 P.M.