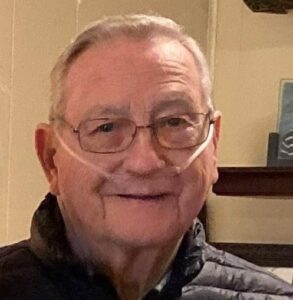 The kind and gentle soul that some called “Joe” and others called “Wendell” was born on November 7, 1940, in Scottdale, Pennsylvania to Joseph and Agnes Bashioum. They moved to Texas as soon as they could get there.

Wendell married the love of his life, Gaylon Casstevens, and recently celebrated 60 years of marriage together.

Wendell served 5 years in the United States Navy. While serving as a Seabee he learned the skill of auto mechanics. He then took that skill and applied it while working for Hermsmeyer Toyota and Volkswagen. Wendell loved cars and his need for speed was put in to action while racing motorcycles, Volkswagen’s, and stock cars.
Wendell left the mechanic scene and began working for Allstate as an Insurance Adjuster. He retired in 2002.

Wendell loved living life. He did and was all things “fun”. Camping, motorcycles, square dancing, boating, fishing, water skiing, banjo picking, guitar playing etc. He made the most of his days and he made them count. He was a jack of all trades. He could build and fix almost everything and sometimes with duct tape. His greatest honor was being a Dad to his girls. He taught us to work hard and made sure we knew how to change the oil, drive a stick shift, and change a tire.

Daddy could sing and put that gift in to motion by becoming a square dance caller while belonging to Ye Ole Squares and Wagoneer’s square dance clubs.

Together with mom they raised us in a Christian home teaching us the value of knowing and trusting God at all times.

He was the captain of “pull my finger” but could not tell a joke to save his life.

Sometimes Daddy entered a task by starting from the end. Things such as wanting to move to the country but getting a cow and goose first that had to be housed in the back yard of our city home.
His dream of moving to the country finally came true in 1976 by purchasing a 3 acre “farm”.