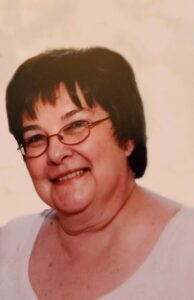 Kathy was born July 19, 1951 to John and Ruth Hanifl in Saint Louis, Missouri. After graduating from Rosary High School, she went on to study nursing at Barnes Hospital School of Nursing before landing her first nursing job as a staff nurse at Barnes Hospital. She trained in the first cohort of psychiatric nurse practitioner students at Washington University School of Medicine and became a psychiatric nurse practitioner at Malcolm Bliss Mental Health Center before moving on to the St. Louis State Hospital Community Placement Program. She earned her Bachelor of Science in Nursing in 1980 from Saint Louis University and became an instructor at the Deaconess Hospital School of Nursing where she was responsible for the didactic and clinical supervision of students in the Behavior Health nursing course. She continued her passion for helping people dealing with mental health issues by becoming a psychiatric nurse at Places for People, Inc. where she assisted severely mentally disabled patients in apartments and group homes. She completed her education when she earned her Master of Psychiatric-Mental Health Nursing from Saint Louis University in 1985.

Kathy moved to Amarillo, Texas in 1984 and began her 36 year career with the Northwest Texas Healthcare System. She started as a quality improvement coordinator in 1985 and became Director of Nursing in 1992 where she oversaw the Behavioral Health Nursing Department. In 1995, she continued to work her way up the leadership pathway and became the Nursing Coordinator and Educator for the Pavilion at Northwest Texas Hospital where she was responsible for the development of nursing staff. She became House Supervisor at Northwest Texas Healthcare System in 2000 – a position she held until her retirement in 2021.

She was passionate about teaching and loved her faculty position at West Texas A&M University where she began teaching full-time in 2000. Kathy taught Behavioral Health Nursing and enjoyed introducing her students to films that covered behavioral health issues. She also oversaw behavioral health clinical courses and brought students to the Pavilion for real-world experience with patients. She worked this full-time position in addition to her full-time House Supervisor role until she transitioned to part-time faculty in 2013. She continued educating the next generation of nurses until her retirement in May 2022.

Kathy met Jim Rogers in 1978 at the Malcolm Bliss Mental Health Center and they wed February 24, 1979. The two went on to have four children, Jimmy, Teri, Katie, and C.J., and raised three dogs; Fanny, Mindy, and Blackie. Motherhood is where Kathy shined. She never hesitated to put her children’s needs before her own, and worked two full-time jobs for 13 years as she and Jim provided for the kids, helped pay their way through college, and supported them as they entered adulthood. She was known for her cooking and baking, and made the best dressing and Hungarian coffee cake at holiday celebrations.

When she wasn’t filling her home with love and kindness, Kathy could be found tending to her plants while listening to Barbra Streisand and sipping a gin and tonic. A lifelong fan of the Saint Louis Cardinals, she rarely missed a game and texted live updates to her kids. She loved her grandchildren and enjoyed attending their concerts, games, and awards ceremonies. Kathy never hesitated to share their accomplishments with friends and family. She traveled enthusiastically and had visited Paris, Tuscany, London, Boston, and the mountain towns in New Mexico where she admired the art and architecture. But her favorite places to visit were her family vacation spots in Cape Cod and the Big River in Missouri.

Kathy was preceded in death by her parents, John and Ruth Hanifl. She is survived by her children, Jimmy Rogers and Marci Thomas of Lubbock, Teri Rogers of Fort Worth, Katie Whitney and her husband Derek of Amarillo, and Chris Rogers of Denver, CO; grandchildren Parker, Braxton, and Corbin Whitney, and Jason Rogers; her brother, Mike Hanifl and wife Susan; sister Carol Bresnahan and husband Mike of St. Louis; along with countless cousins, nieces and nephews across the country.

There will be a Celebration of Life service on Tuesday, December 20 at 1:00pm at Boxwell Brothers Funeral Home in Amarillo. In lieu of flowers, the family requests donations be sent in Kathy’s honor to Guyon Saunders Resource Center at 200 S. Tyler Street, Amarillo, TX, 79101.