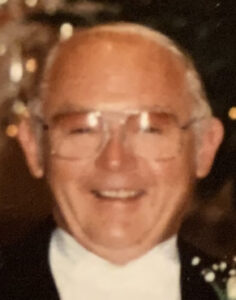 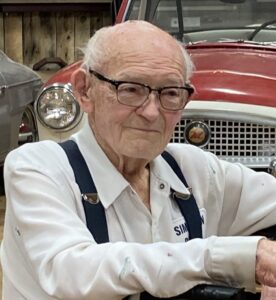 Kenneth was born March 12, 1938, the oldest of two sons born to Dorothy and Ezra Simpson. He grew up in the family grocery store and Phillips 66 service station in Elmwood, OK. He graduated from Beaver High School in 1955 then attended Oklahoma A&M University.  He graduated from Apostolic Bible School in Baxter Springs, KS.

He met his wife, Shirley Fish, while she was singing in a revival at Midway Country Church.  He offered her a ride in his brand-new 1956 Chevrolet and the rest is history.  They were married on April 13, 1957.

They built the Hi-Way Cafe in Elmwood, OK, in 1959. They operated it before moving on to new things in Oklahoma City, Atlanta and Canyon. The family moved to Amarillo in 1968.

Kenneth was a jack of all trades and worked for a variety of companies including Northern Natural Gas, Delta Airlines, ASARCO and operated a Texaco Service Station before finally becoming a paint contractor.  He operated Simpson Paint Company for most of his career.  He could do anything he set his mind to, but his favorite things were being a dad, a grandpa and a great-grandpa.

He spent thousands of hours either playing with his family or working on one of their many projects.  He worked on school projects for two generations, remodeled numerous homes for his children and grandchildren, and worked on rent houses and shops.  He rode a unicycle, a bicycle backwards while sitting on the handlebars, took flying lessons on a whim, bought a plane or would trade someone for a dune buggy or motorcycle.  He built personalized Christmas presents for everyone in the family year after year.  He loved to make trophies and plaques for any special occasion.  Kenneth was the dad and granddad who took you skiing, colored Easter eggs, shot off loads of fireworks with the joy of a kid and carved Halloween pumpkins.  Everything was either ‘the best’ or ‘the worst’ he’d ever seen.  He could gripe with the best of them but was very easy-going.  He thought someone looked like Robert Mitchum at least once a week.  He loved work and it was made all the better when it could be done for family.  The last time he put on his ‘painter whites’ was November 13th to ‘go work on the shop’.

Each of his grandchildren were special to him.  Andria was the first born and the first to get his full attention.  Brian was the only man in the bunch and the athlete.  Kallison and Kellan were twins and were two times the trouble but twice the fun.  Krisandra was his constant companion and sidekick.  He taught her all the tricks of the trade and she made it possible for him to live at home until the very end.  Kenneth’s entire family owes her a debt of gratitude for dealing with the brunt of the health problems which came with his old age.

The family would like to express their sincere appreciation to Christy Hernandez and Marsha Thomas and the staff at Northwest Wound Care.  Their diligent care each week over the past two years were a bright spot in his week.

He was preceded in death by his wife, Shirley: his parents; and a brother, Lynn Simpson.

Please use this link to view the service: https://www.youtube.com/watch?v=2naAeBUJjcY