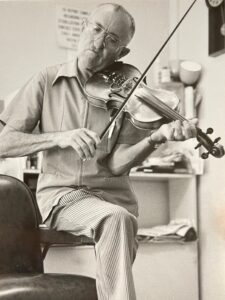 Catholic Church in Vega, TX.  Viewing will be held prior to service at 9:30 a.m.  Burial will be in Memorial Park Cemetery at Vega, TX.    We respectfully request that all attendees to the service wear a mask and to adhere to social distancing protocols, a maximum of 50 people will be allowed to attend the service.  Arrangements are by Boxwell Brothers Funeral Directors, 2800 Paramount Blvd.

Known as “Marv” to family and friends, he was born on January 14, 1927, and grew up on the family farm a few miles north of Vega, TX.  He was a life-long resident of Vega, TX, until moving to Amarillo, TX for the last couple of years of his life.

On November 18, 1961, he married Clara Bellinghausen, to whom he was married for the next fifty-nine years.  Marvin was a barber in Vega for fifty years and worked the family farm for many years.  During slow times in the barber shop, he could often be seen through the windows playing the fiddle.  He was self-taught and played only by ear.  He played in local country music bands as well as neighborhood jam sessions.  In his later years, he played in the Now and Again bluegrass band.  He greatly enjoyed traveling around the area to bluegrass festivals.

Another passion of his was playing dominos.  For decades, a group of friends gathered daily at lunch time to play.  Marvin also helped organize the Oldham County Round-Up parade for many years, and later was known for driving his antique John Deere tractor in the parade.

Marvin was a devoted husband and father.

He is survived by his daughter, Linda Hailey, of San Antonio, TX; and a son, Al Slutz, of Marana, AZ.