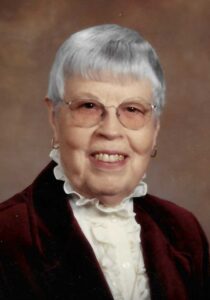 Merle was born in the family home in Amarillo, Texas on October 1, 1925, the fourth child of Edgar and Ruth Coffee Coble. She attended Amarillo High School graduating the summer of 1943. She attended Phillips University in Enid Oklahoma before meeting her future husband, William Roy Morris on a bus between Enid and Amarillo.  Despite being ready to start a family, the U.S. Army had other plans.  Roy was sent to Europe to serve as a Flight Officer with the 8th Army Air Force in England. Merle remained with her parents during the war, corresponding with Roy during that time. He was a Flight Officer in the Army Air Force. Following his tour of duty, Roy proceeded straight to Amarillo reuniting with Merle and meeting her parents for the first time. They promptly married in January 1945 in Amarillo. They had a short honeymoon in California courtesy of the Army Air Force. Following his discharge, they moved to Oklahoma and began their life as a couple.

The couple lived near his parents, as he farmed with his father for several years in Oklahoma. During this period of learning to be a farm wife, they had two children a boy and a girl. In hopes of being independent, they moved to Arkansas on a small farm of their own. Another daughter was born before they moved to the Amarillo area in 1954.

She worked for several companies in Amarillo before going to work at Pantex Energy, an organization charged with supporting nuclear weapons assembly and disassembly. She worked 30 years before retiring. She and her husband enjoyed square dancing, traveling, and exhibiting for several decades. They also traveled nationally and internationally.  When not spending time with family and friends in Amarillo, they spent their remaining time at their home in Mesa, Arizona. She was widowed in 1998.

She attended the First Christian Church for over fifty years. Many of the years she sang in the choir and was active in the Christian Women’s Club.  Merle continued to enjoy traveling after Roy’s death and became interesting in writing

The family invites you to celebrate her life with us at a memorial service on Saturday, February 19, 2022, at 10:30 a.m., at the First Christian Church with Rev. Brett W. Coe officiating. Arrangements are by Boxwell Brothers Funeral Directors, 2800 Paramount Blvd.

Those desiring to honor her memory should send donations in lieu of flowers to the Music Ministry of the First Christian Church or the charity of their choice.