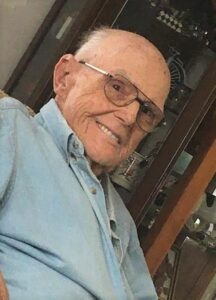 Services will be at 1:00 P.M., Friday, March 13, 2020, at Boxwell Brothers Ivy Chapel, 2800 Paramount Blvd. Burial will be at Llano Cemetery. Military rites are provided by Volleys for Veterans. Arrangements are by Boxwell Brothers Funeral Directors, Amarillo.

Joe entered the United States Air Force in 1949 at the age of 17 and he was a veteran of the Korean War.

He married his long-time sweetheart, Billie Rhea Pruett on October 19, 1950 in Carlsbad, NM. Together they enjoyed square dancing and traveling. They were married for 52 years until her death in 2002.

Joe retired from the Air Force in 1970 with the rank of Master Sergeant. Later that year, he began teaching Vocational Electronics at Amarillo High School. His second career lasted until his retirement in 1993. His remaining years were dedicated to travel, buying and selling various items, and playing poker when he could.