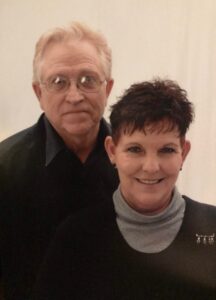 He was preceded in death by his wife of 48 years, Jenny Austin and sisters, Nancy Dorsey & Vicki Austin and brothers Bobby & Troyce Austin. He is survived by his daughter, Amber Wilson, son, Chad Austin and wife Marlena. He was a proud Papaw to his grandchildren Ashton & Aidan Wilson and Braden & Braxton Austin. He is also survived by his brothers, Harold and Larry Austin as well as many nieces and nephews and great nieces and nephews.

She is survived by her daughter, Amber Wilson, son, Chad Austin and wife Marlena. She was the best Nanny ever to her grandchildren Ashton & Aidan Wilson and Braden & Braxton Austin. She is also survived by her sisters Lori Ketelle, Melanie Lynn and Toni Brantley and brothers George Starkey and Terry, Marty and Scott Howard as well as many nieces and nephew and great nieces and nephews.

A joint memorial service will be held at 1PM on Friday, October 29, 2021 at The Church at Bushland.

7 Replies to “Ricky and Jenny Austin”