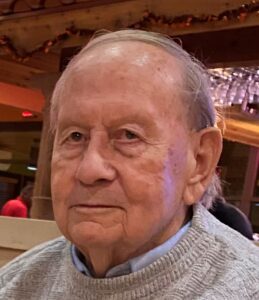 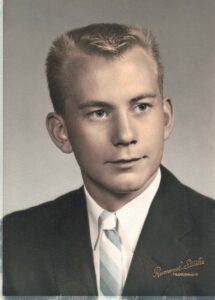 Celebration of Life will be held this summer when family and friends can all join.

Bob was born in Mayville, Michigan on November 1, 1938, to Matilda Sarah Weiler and Ward William Robison; he was the 10th child of 11.

Bob graduated from Mayville High School in 1957, and Northwood University in 1962 where he was a star basketball athlete and coach, just ask him. He held the Mayville High School scoring recorder with 37 points in one game. He held this title for 5 years. One of his quotes in his senior yearbook was, “I, Bob Robison leave my ability to play basketball to anyone that can use it.” He started his career working for F.W. Woolworth in 1962. He became a top general manager for the company working for Woolco. On October 10, 1964 Bob married Lois Ann Reuter in Farmington, Michigan. They were married 27 years when Lois passed. Lois was the love of his life, and she was the “lucky girl” that got him (another senior yearbook quote). Bob never dated after she passed. Bob and Lois welcomed their first son, Robert “Ed” Edward Robison, Jr. in 1971 and their second son, Jeffrey “Jeff” Ward Robison in 1974. In 1982, Bob stepped out of the retail business and opened a restaurant in Houston called Bobby Joe’s. In 1985, he went back to work for Woolworth and later on with ALCO until his retirement in 2001. The Robison family moved many times during Bob’s lifetime. They lived in Michigan, Ohio, Kentucky, Texas, Louisiana, Missouri, Iowa, and New Mexico. Bob enjoyed just about everything he did. He loved to play and watch golf, tennis, basketball, football and baseball. He enjoyed working in the yard and feeding the critters. In the kitchen, he was known for his chili and cranberry sauce. He was very active in his grandchildren’s lives. He would always say, “He’s (or she’s) a Robison! That’s why they are so good at everything.” Bob was a caring family man. His family not only included his children and grandchildren, but also his in- laws, adopted family and friends, and many nieces and nephews. Bob was known by many as Grampa Bob or Uncle Bob.

He was preceded in death by his beloved wife Lois; his parents Ward and Matilda Robison; his in-laws Ed and Ellen Reuter; his brothers Ron, Don, Ralph, Dale, and Howard; and his sisters Irene, Phyllis, Betty, and Shirley.

Survivors include two sons, Ed Robison and wife Mamiko of Kirkland, Washington and Jeff Robison and wife Genie of Amarillo; three grandchildren, Austin Robison and Blayne Robison, both of Amarillo, and Leah Robison of Kirkland, Washington; a sister, Bernice McLane of Mayville, Michigan; sisters-in-law, Arlene Robinson, Joyce Robison, Nancy Brinker, Jean Bower and husband Pat, all of Michigan, Eunice Bass and husband Mike, and brother-in-law Bill Reuter, all of Florida; in-laws, Clint and Pam Deeds, Trulyn and Jessica Deeds, all of Amarillo; and many nieces, nephews, family friends and those who called him Grampa Bob.

In lieu of flowers, the family requests that memorial donations be made in honor of Robert “Bob” Robison to a local charity of your choice.