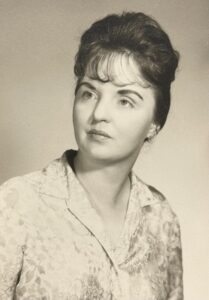 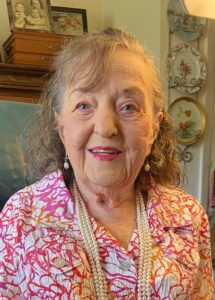 Ureta Nell Traweek Potter, 86, of Amarillo, TX, left this world on September 28, 2022, entering eternal rest with her Lord. She passed away peacefully after a long illness, leaving a legacy of family and friends who were fortunate enough to have had her in their lives.

Ureta was a force of nature – her intellect, generosity and adventure abounded. She was born January 2, 1936, the first of four children born to Maurine Sober Traweek and J.C. Traweek, Jr., in Lawton, Oklahoma.  She spent her childhood in several small Oklahoma and Texas towns where her father was a Southern Baptist preacher. Her happiest childhood years were spent in Godley, TX, where she graduated from Godley High School and retained beloved friendships to her last day, including a yearly gathering for her high school reunion. She went on to graduate from Texas Christian University with a bachelor’s degree and her registered nurse license.

Ureta was the type of person who was always generous with her love, whether it was as a loving matriarch, volunteering her time for various causes, or simply taking in a stray animal and making it another “family member”.   Along with her faith and love of God, her six children, eight grandchildren, three great grandchildren and her church family were the center of her life.

Ureta excelled in her 40-year nursing career where she cared lovingly for hospital patients.  After relocating to Amarillo in the 1960s, she worked at St. Anthony’s Hospital, High Plains Baptist Hospital (now BSA), Quest, and for 20 years as Charge Nurse at the Amarillo VA Hospital.  She loved that her nursing care at the VA was a way to give back to those who had served our country.

As a true believer in Jesus Christ and a faithful Christian, Ureta served as a church pianist from the age of 16. There wasn’t a Baptist hymn that she couldn’t play beautifully. She was a member of Friendship Baptist Church (now Tradewinds Baptist Church) for 52 years. Even as her health was failing, she managed to play the piano there for Sunday morning services 25 times in 2021 and 5 times in 2022, and had a deep desire to play more.

If you were lucky, you received one or many of her handwritten letters or cards, sent to lift people’s spirits.  These packed missives, often included news articles, cartoons, insights and opinions to uplift and inform. She was a voracious reader and loved to travel, particularly to visit her children and grandchildren across the U.S. and to visit historic locations.

Ureta volunteered for several years at Palo Duro Canyon and the Panhandle Plains Museum. She had a near photographic memory and sometimes was known to tell stories with a “Texas flair” where the stores got bigger each time they were told. She passed on her sense of adventure to her children and grandchildren, each of whom has one or more stories of their travels and fun with her.

Ureta lived a long and fulfilled life and while not without challenges, she knew it had been truly wonderful and was ready to go to Heaven.  She leaves a legacy of kindness and generosity to her family and friends, and a deep sense of faith and love for God.

The family would like to extend their gratitude to her sister Janet Wright, to her caregiver Rose Wilson, and her neighbors Wendell Trent and Maria Escoto.  Without them, she would not have been able to live at her home until the end, as she had always desired.