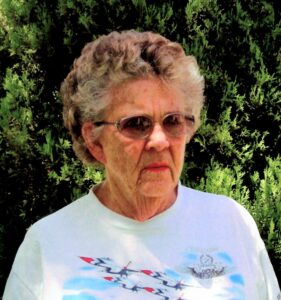 Her services will be officiated by Jim Shelburne, Minister of Washington Avenue Christian Church, on December 16, 2019 at 10:00 A.M., at the Boxwell Brothers Ivy Chapel, 2800 Paramount Blvd. Her burial will follow at Memorial Park Cemetery, at I-40 and Whitaker Road. There will be a lunch for the family at noon at Washington Avenue Christian Church. Arrangements are by Boxwell Brothers Funeral Directors, Amarillo.

Verna was born on November 4, 1927 on a farm outside of Athol, Kansas, to William and Ina Kirkendall. She married Therwin Griffith on November 30, 1947. After the birth of their oldest child Billy in October 1948, they made the decision to move to Amarillo in 1950. Therwin went to work with Texas National Guard as a mechanic, and Verna enjoyed the next several years delivering the rest of their four children and caring for them.

She worked in various venues from waiting tables, to cooking in restaurants, to sales, to Iowa Beef Processors, and finally as a custodian for Paramount Terrace Christian Church. During the last 20 years of her life, she enjoyed taking the opportunity to spoil her grandchildren and great-grandchildren.

After celebrating their 60th wedding anniversary in 2007, she was preceded in death by her husband, then by her second son, Gerald, and by a granddaughter, Brandy Griffith Sandoval.

The family request that any memorial be sent to either Washington Avenue Christian Church or Meals on Wheels of Amarillo.

One Reply to “Verna K. Griffith”