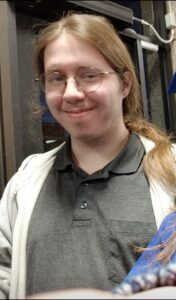 The funeral service will be at Boxwell Brothers Funeral Directors, 2800 Paramount Blvd., Amarillo, Texas 79109. It will take place on Monday, 7th of March at 2 PM.

Zachary Gosselin was born in San Antonio, Texas to Michael John Gosselin and Cynthia Harper-Gosselin on May 11, 1994. He attended Amarillo High School and graduated with honors in 2012. Later, he studied at Amarillo College and West Texas A & M University. Zachary Gosselin graduated from his college degree programs with honors as well. After working at the Amarillo Southwest Library, in 2019, he returned to Amarillo College to work as a Staff Assistant in the Registrar’s Office at the Washington Street Campus.

In 2020, Zachary Gosselin was preceded in death by his grandfather, James E. Harper.

Zachary was an avid reader and enjoyed many books including, a favorite, Hitchhiker’s Guide to the Galaxy.