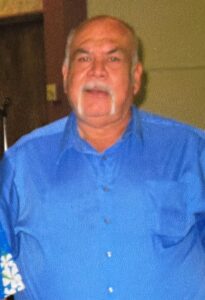 Private family services will be held at Southlawn Assembly of God at 4300 S. Bowie in Amarillo, TX on Monday the 11th at 7 P.M.

Cesar was born in Mercedes, TX on December 25, 1954 to Mary Dolores and Daniel Munoz. Cesar graduated from Amarillo High School in 1972. He married his wife Angelita Munoz on November 12, 1974.

Cesar worked for the City of Amarillo for 25 years, and then was a truck driver for many years after that.

Cesar loved to cook out for family and friends, making sure that there was always plenty. If you left hungry, it was your own fault. He enjoyed getting to talk to and spend time with his grandchildren. He was excited when they got their own phones, so he could call them directly.

He was preceded in death by both of his parents, and his wife, Angelita Munoz.

Survivors include his son, Jonathan Munoz and wife Kelly of Amarillo, TX; a daughter, Amy Rodriguez and husband Tomas of Lubbock, TX; four brothers; two sisters; five grandchildren; and many nieces and nephews.

In lieu of flowers, the family requests that memorial donations be made to Southlawn Assembly of God at 4300 S. Bowie in Amarillo, TX 79110.