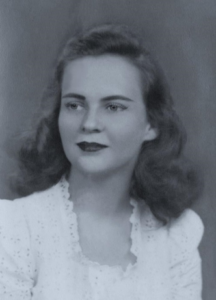 Patricia Ann Burns Rothkrug, 95, of Amarillo died February 14, 2020.  A private memorial service will be held at a later date.

Patricia was born April 17, 1924, in Birmingham, Alabama, one of seven children of Samuel Rush and Carolina Anna Schauer Burns. She graduated from Blessed Sacrament Academy in 1942 and worked in the office of Stockham Pipe and Fittings, which had recently retooled to produce materiel for the war effort.

Serving as a church volunteer at the USO in Birmingham, Patricia met her future husband, Edward Rothkrug of Brooklyn, New York, a flying cadet. They exchanged letters through the course of World War II, and, after distinguishing himself as a decorated B-24 navigator, Lieutenant Rothkrug returned to Maxwell Field in Montgomery, Alabama, where Patricia and he were wed at the base chapel on February 5, 1946.

The couple resided briefly in Panama City and Tampa, Florida before moving west. As an Air Force wife, Pat made a home for Ed and their three girls in base housing on Walker Air Force Base, Roswell, New Mexico (1950-59), Amarillo Air Force Base (1959-62), and in suburban Amarillo after retirement from the military.

Patricia loved to read, especially Southern literature, and read the Amarillo Globe News “religiously” every morning.  She loved fresh-cut flowers and collected vases for her carefully arranged bouquets. She always had a song in her heart and a large collection of LPs by great performers, she listening to concerts on television, and rarely missed Lawrence Welk’s Champagne Hour on PBS.

She was preceded in death by her six brothers and sisters and her spouse, Lieutenant Colonel Edward Rothkrug, who died Feb. 7, 2005.

The family is deeply grateful to the caregivers of Ruby Slippers Care, Inc. and BSA Hospice of the Southwest for enriching and enlivening our mother’s last years with companionship and loving care.