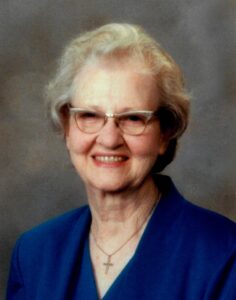 Graveside services will be held at 2:00 P.M., Monday, February 3, 2020 at Llano Cemetery, with Larry Barber officiating. Arrangements are by Boxwell Brothers Funeral Directors.

Peggy was born on October 12, 1924 to Jesse and Edythe Woosley in Brady, TX where she went on to graduate high school. Peggy was a homemaker in her own home, raising seven children. She taught Sunday school for 50 years and was a Cub Scout Den Mother and Brownie Leader. She was a member of Trinity United Methodist Church in Amarillo for 52 years.

In 1946 Peggy married her high school sweetheart, Malcolm Benefield, and they made their home in Odessa, TX for 21 years before moving to Amarillo, TX.

She was preceded in death by her husband of 66 years, Malcolm “Benny”; sons, Mike Benefield, and Brad Benefield; daughters, Susy Benefield, and Cindy Barber; and granddaughter, Katie Barber.

In lieu of flowers, memorials may be sent to Trinity United Methodist Church, BSA Hospital, or Shriners Children’s Hospital.