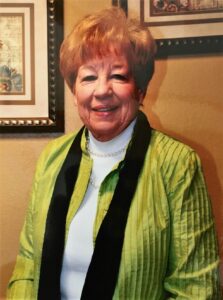 Connie Jo Bingham died at her home March 19, 2020. She was surrounded in love and prayer as she went home to be with the Lord.

She is survived by her son, Clay Bingham, daughter-in-law Julie Bingham, and her grandchildren Kaitlyn Bingham, Grayson and Megan Bingham, Braden Bingham, Logan Compton, and Graham Compton as well as many other spiritual children who knew her as a second mother, and faithful mentor.

She was born on December 22, 1937 to two wonderful parents, Arnold and Lorine Haskin of Goree, Texas. There she grew up on a very humble farm and attended Goree High School. She was an excellent basketball player leading her Wildcats to the District Championship her senior year. Her claim to fame was scoring 51 points in a single game as point guard. She met and married Alan Bingham and subsequently moved to Amarillo, Texas where she supported the family farm and cattle operations. She also worked at Mr. G’s clothiers beginning as a model and then selling clothes there for 28 years. She was a member and bible class teacher at Paramount Baptist Church for over 60 years. She traveled around the world doing world missions with International Evangelism Association. In 1991, she started a business called Texas Plum Line. Using her grandmother’s recipes, she began to make wild plum jam and then expanded the product line with many variations using the Texas wild plum as her base. She shipped those products for corporations and individuals for Christmas gifts in every state and many foreign countries. She pursued that business until she was 81 years old. She was a sportsman, who loved to hunt and fish well into her late seventies. She was truly a Proverbs 31 woman. Her passion and her mission in life was to bless people with the gospel of Jesus Christ and to encourage those who were hurting and those who had suffered loss. Her counsel, teaching and intercessory prayer will be greatly missed. She lived life to the fullest and left nothing on the field. We who knew her shall miss her greatly.

Memorial Services will be at The Bingham Farm, 5060 Helium Road, Amarillo, Texas on Saturday, March 28, 2020 at 6:00 p.m. The service will be posted online for those of you who cannot attend. She will be buried in the Friendship Cemetery in Goree, Texas on Sunday, March 29, 2020.