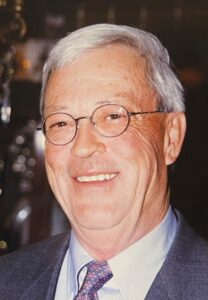 Joseph Phillip Brent Sr. died on November 16, 2021, at the age of 81. Phillip was born on April 8, 1940, in Amarillo, Texas to Robert Price Brent Jr. and Lillian Blanche Thompson Brent.

Phillip had a beautiful, indomitable spirit and an amazingly clear mind. He loved children, horses, and dogs (Lolli and the late Biscuit) and they loved him.

He began school at the Bivins School in Masterson TX, transferring to Bivins Elementary in Amarillo. After attending Texas Military Institute he graduated from Amarillo High School in 1958. Phillip went to the University of Oklahoma where he was a member of Kappa Alpha Fraternity and later transferred to Southern Methodist University. He married Nancy Fellers in 1965.

Phillip is the grandson of Georgia Emma Sneed Thompson and Terry Thompson Sr of Amarillo and the great-grandson of Joseph Tyre Sneed Sr and Georgia Beal Sneed of Georgetown TX.

Joseph Tyre Sneed Sr with his oldest son developed ranch land in Moore and Hartley counties. Phillip’s heart was always with the family ranch where he spent his early years and he returned to Moore County as a rancher and farmer.

A fourth-generation rancher Phillip loved and respected the land and he passed that legacy on to his two children. He spent time teaching them about land conservation and ranch work. No task was too menial for him, cleaning tanks, water gaps- he enjoyed mowing on his tractor. Until his health declined he was on horseback riding the pastures.

Phillip’s great-great-grandfather, Joseph Perkins Sneed (Born in Davidson County, TN) was ordained as an elder in the Methodist Episcopal Church, South by Bishop John Emory in 1833. He preached from a log cabin on the Brazos River. One of the first circuit riders in Texas, he was also a farmer, as well as an educator. He founded the first Methodist Church in Waco, TX, now the First United Methodist Church of Waco.

On December 27, 1988, Phillip married Suzanne Stokes Curtis and they blended their two families.

Phillip loved having the grandchildren working and exploring at the ranch. He delighted in family gatherings for holidays and special occasions in Santa Fe, Dallas, and Thanksgiving at the Broadmoor.

The family would like to thank the wonderful physicians who cared for Phillip: Dan Hendrick MD, Alan Keister MD, Kalil Al-Nassir MD, Joel Osborn MD, and Praveen Tumula MD., the caring nurses at NWTH especially Julia in CCCU, Sara, Tristan, and Matthew on the 5th floor, Colby Neely in the ER and Kristi at BSA Hospice. Nettie Tucker and Sergio Rodriquez were special caregivers and friends. Phillip was grateful to his friend Bill W for 37 years.

A service in Phillip’s honor will be held at Polk Street United Methodist Church on Tuesday, November 30, 2021, at 4 pm. There will be a virtual service at psumc.com.

If desired, memorials may be sent to the Lillian Blanche Brent Scholarship at The Center for Collegiate Recovery Communities at Texas Tech University, CCRC, PO Box 41160, Lubbock, TX 79409-1160 or Heal the City at 609 S. Carolina St, Amarillo, TX 79106.