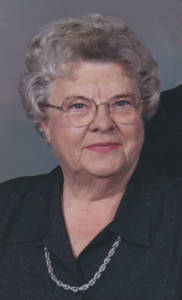 Frances was born January 27, 1930, to Luther Jackson Lowry and Viola Ruth Smith Lowry on the family farm that Luther and his mother bought in 1917, located in the Llano Community of Armstrong County. She was an only child. She went to school in Claude, Texas and graduated from Claude High School in 1947.

When Frances was born, her first visitor was Howard Eugene Dye and his mother, Lola Dye. Howard was six weeks old. Howard and Frances were always best friends and sweethearts. They lived two miles apart on the road that connected their family’s farms. They married on August 14, 1951, and continued to live on the Dye home place until 1958, when they moved to Amarillo.

Frances began working at a very young age. She began at the First National Bank of Claude, after moving to Amarillo she decided to stay at home. Howard and Frances had two children, Janet Ruth and Alan Eugene. She was determined to be the best mother possible, spending all of her time as a homemaker, seamstress, cook, and gardener. She also loved to knit and crochet. You name it and she mastered it. After both children were in school, she took a few classes at Amarillo College and went to work at Security Federal Savings and Loan. Several years later, she started at the American National Bank, which changed to Texas American Bank, where she worked until her retirement in 1987.

Retirement meant farming back on the home place. “You can’t take the country out of the girl” was one of her sayings, and the other was “The Lord works in mysterious ways.” They were back where they loved the most, at the farm.

For the past decade or more, Frances struggled with Alzheimer’s.

Her loving husband of 63 years, Howard; her parents; and all of her in-laws preceded her in death.

She is survived by her children, Janet Dye Luman (Larry) and Alan Dye (Tammy); her grandchildren, who she loved dearly, Noah Luman, Brittney Dye Funderburk (Logan), Blaine Dye, and Creed Dye, all of Amarillo; her five step-grandchildren, who she loved and accepted totally, Dr. Ashley Luman Williams, of Colorado Springs, Kollin Luman, of Portland, Oregon, Blayne Keplinger (Chelsea), of Austin, TX, Lance Keplinger, of the US Navy, Brodie Keplinger, of Graham, TX; three very special great-grandchildren, Oakley Funderburk, Cohen Funderburk, and Kinley Luman, all of Amarillo; her step-great-grandchildren, Zeke and Zachery Williams, of Colorado Springs, and Takachu Luman, of Portland, Oregon; her only living cousin, Sam Lowry, of Clarendon, TX; her beloved nieces and nephews; and her very special and devoted caregiver, Jennie Sandlin.

The family wishes to thank the wonderful staff of Interim Hospice and for the past few weeks, the staff at Heritage Convalescent.

Frances loved flowers but was a very practical woman. In lieu of flowers, you may send memorials to First United Methodist Church of Claude, where she was a life member, P.O. Box 136, Claude, TX 79019; or the Claude Cemetery Association, PO Box 189, Claude, TX 79019; or any charity of your choice.