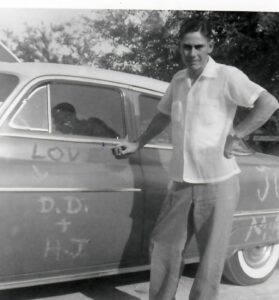 Harold was born on August 24, 1934 in Powderly, Texas to Claudia and Fred Jones.

Harold had a passion as a Carpenter. He was a self-employed carpenter contractor for over 30 years in Amarillo, TX. He helped Caprocks building trades teacher, Jene Davis, and his class on many building projects. Harold helped build Fannin Jr. High, Boys Ranch, Gattis Shoe Stores, remodel Anthony’s Retail Store and other local businesses in Amarillo.

After a good friend, Bob Rudd, gave him the idea, He also found a love in owning a laundry mat; 10th Street Laundry for over 10 years, back in the 80’s and 90’s before he sold that and went on to other business owning adventures. In the mid 90’s, Harold and his Wife bought a building off 27th and Grand and opened up  Pazazz Hair Studio and Tanning Salon , where their daughter Janet was a hair dresser and ran Dexter Laundry Equipment out of the other side of the building. Him and his wife also had several rental houses in the Amarillo area after Harold retired in late 90’s.

He was preceded in death by his parents; brothers, Samuel Jones, Fred E. Jones and Floyd Jones; a niece, Sandy Jones; a nephew, Terry Jones; and a daughter-in-law, Ann Jones.