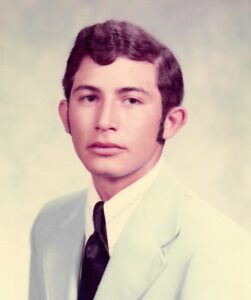 A funeral Mass will be held at 2:00 P.M., Tuesday, November 23, 2021, at St. Ann’s Catholic Church in Canyon, Texas with Father Scott Raef as celebrant. Arrangements are by Boxwell Brothers Funeral Directors, 2800 Paramount Blvd.

Amadeo lived most of his life in Gruver, Texas, having moved there with his family when he was in the first grade. As a student at Gruver High School, he learned how to weld under the wise mentoring of Jim Cain and was an active member of the rodeo team as a bull and bronc rider until he graduated in 1975.

Following his graduation, he worked alongside his childhood friends, Monte Cluck and Tim Weldon, at Dean Cluck Feedyard. It was there that he met his future wife, Tencha Lechuga, to whom he proposed after just one week. Amadeo later became a long-time business owner in Gruver, known for his strong work ethic and quality welding craftsmanship. In the latter part of his life, he worked in the oil and gas industry in West Texas.

Amadeo was the consummate cowboy. He was a talented craftsman, able to make just about anything out of leather and steel. Although he was tough on the outside, to the people he loved he was kind and soft-hearted. He was a hard worker who loved his family, the mountains, great westerns, and great music; but what he loved the most was spending time with his grandchildren, Mason and Sophia.

He was preceded in death by his parents, A.R. and Olivia Cazares.