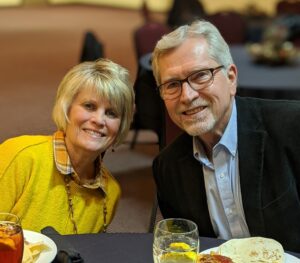 Mr. Boyett was born April 29, 1948, in Big Spring, Texas, to John E. and Mary Boyett. He grew up the middle child with two sisters, Rita Almond and Leta Young. The family moved to Amarillo in the early 1950s, and Mike took up the violin at Humphreys Highland Elementary School. As his family understands it, Mike was forced to practice the violin 30 minutes every day, whether he wanted to or not. In later years, no one—including Mike himself—felt anything but appreciation that his mother required this of him.

He attended Bowie Junior High and then the new Caprock High School in southeast Amarillo. Mike’s was the first sophomore class at Caprock when it opened in 1964, and therefore the first class of students to graduate after a full three years at the school. A proud Longhorn, he was a varsity cheerleader and played violin in the school orchestra. He also played the bass drum in the band. During this time, the Boyett family hosted a West German exchange student named Hans Roth, who became one of Mike’s closest, lifelong friends. Mike graduated in 1967 and enrolled at Texas Tech University in Lubbock. He and his sisters represented the first generation in their family to attend college. 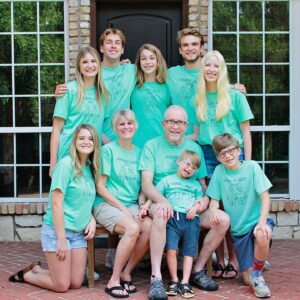 At Texas Tech, where he studied architecture, he met a student studying deaf education named JoDeane Brown, of Lubbock. They fell in love and the couple was wed in January of 1970. Around this time, Mike was delighted to discover he could earn extra money as a member of the Lubbock Symphony, in which he played the violin. Over the next few years, both would graduate from Tech, spend a month traveling across Europe with John and Mary Boyett, and return to make a home in Lubbock.

Mike and JoDeane began their careers and welcomed their first two children before moving to Amarillo in 1978, where Mike opened Boyett & Associates, an independent architecture firm. He designed and built his first and only house in Amarillo in the new Mays Ranch development, at the corner of Lynette and Virginia streets. His was the first house on the block in 1978 and the headquarters of the Boyett family for the next 43 years. Fittingly, it was where he passed away on Thursday, surrounded by family.

Mike and JoDeane joined Paramount Baptist Church in 1978, where he served as a deacon and a Sunday School teacher for the next 40-plus years. Whether teaching high school girls, young married couples, or retirement-age adults—all of which he did at Paramount, at various times—he always loved encouraging others with his faith, wisdom and understanding of Scripture. He volunteered in the youth ministry while his children attended there, and in the late 1980s. He sang in the church choir until Paramount formed a church orchestra. That’s when he dusted off his violin. He would play the violin in church services, special events, weddings and even funerals at Paramount for the rest of his life. 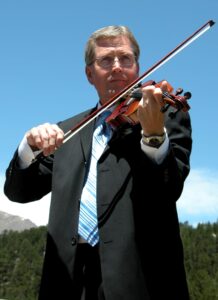 He also “played” the saw, but was rarely asked to do so in a public setting.

As an architect, Mike’s expertise is on display across Amarillo. He began specializing in church design in the early 1980s. Every Sunday, thousands worship in sacred spaces he imagined, designed and saw to completion. These include Coulter Road Baptist Church, Trinity Fellowship Church, Southwest Church of Christ, First Family Church (formerly Southwest Assembly of God), St. Hyacinth Church, Paramount Baptist Church and many others across the Texas Panhandle.

Meanwhile, Mike was also one of the area’s early authorities on metal building design, traveling as far away as Nevada, Louisiana and Montana to work on design projects. He designed the metal-fabricated elementary school gyms throughout Amarillo Independent School District, where tens of thousands of students gather each weekday for their P.E. classes. Working for Lavin Architects over the past 15 years, he was also instrumental in designing a number of Toot ‘n Totum buildings. He also designed several structures at Pantex Plant, which he faithfully and patriotically refused to discuss with his family. Though not all may recognize his name, Amarillo residents interact with his architectural legacy every single day.

A loving father and grandfather, Mike spent his non-work hours taking his family camping, fly-fishing and backpacking with a close group of friends from church. He was most at home wading Cebolla and Brush Creeks near Lake City, Colorado, and the Cimarron River in New Mexico. In the 1980s, he served on the Paramount Terrace PTA, coached Kids Inc teams, and helped with the Boy Scouts. In later years, Mike became a tireless volunteer for Paramount Deaf Church, Panhandle Down Syndrome Guild, and Mission 2540. He also began gardening in earnest and had been taking classes toward becoming a Master Gardener. 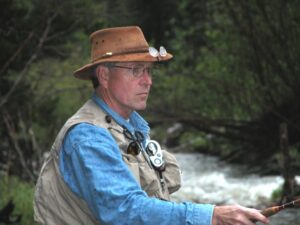 But his most important passion, apart from his faith, was directed toward his family. Mike and JoDeane raised three children and completed meaningful careers but truly flourished as Pops and JoJo. They took delight in their eight grandchildren, gathering the family together almost every Friday night for pizza at their house, and once every summer for a five-day Cousins Camp, typically in the mountains of New Mexico or Colorado. Cousins Camp was always Mike’s favorite week of the year, filled with adventures, scavenger hunts, hiking, laughing, dancing, fishing, and wildly inefficient ice-cream making. Just like his mother expected him to play the violin every day, he expects Cousins Camp to continue without him every year.

Mike retired in April 2020 because of the pandemic. In January of 2021 he was diagnosed with gliosarcoma, a rare, cancerous and deadly brain tumor. The resulting surgeries, treatments and therapies would make the next year the hardest of his life, but he faced these months with a smile, a good attitude, and unwavering faith. Through it all, he was surrounded by the love and support of his family.

Mike was preceded in death by his parents, John and Mary Boyett. Survivors include his wife, JoDeane Boyett, who cared for him with incredible dedication and compassion over the past year; his sisters Rita Almond and Leta Young; his son Jason Boyett and his wife, Aimee, of Amarillo; son Brooks Boyett and his wife, Sunny, of Amarillo; and daughter Micha Boyett Hohorst and her husband Chris, of Morristown, New Jersey; plus nieces and nephews, and eight grandchildren. The last time he left his house was to celebrate his oldest grandchild’s graduation from college.