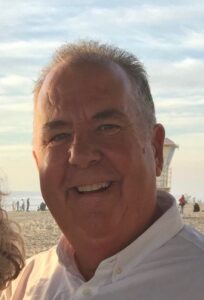 Daniel Paul Coonan, 66, of Georgetown, TX died unexpectedly on Sunday, November 28, 2021.
Daniel was born on June 3, 1955 in South Milwaukee, WI to Gerald and Doris Coonan. He earned his bachelor’s degree in Business Administration and Marketing from the University of Wisconsin-Whitewater. In 1978 he married Catherine Kaskubar with whom they adopted their only son Corbin in 1991. He worked for Fort Howard (Fort James) in Green Bay as a Salesman and transitioned to Vice President of Sales and Marketing by the time he left the company. At that time, he joined Andy Hetzel Jr. as part-owner of NPS Corp in Green Bay, WI as Vice President. Dan was prominent and beloved throughout the paper industry and was a mentor and father figure to many.
On September 12, 2008, Dan’s family grew when he married Carrie Kohlbeck, in Green Bay, WI. Dan gained two additional children- a daughter, Kailyn and son, Samuel. This extension of family brought Dan an immeasurable amount of love and laughter during their time together. Dan and Carrie recently celebrated their 13th Wedding Anniversary. In their short time together, they went on many remarkable adventures, traveling the world from Bangkok to Scotland and all over the United States. Dan and Carrie had plans to travel to Wyoming, Idaho, and Montana in the coming year so that Dan could complete his travel to all 50 U.S. States. Dan’s family was of utmost importance, and he loved to make and create memories with them. According to Dan, “the memories are the treasure.”
He played competitive tennis for most of his life. His other favorite hobbies were playing golf, swimming, eating dessert for breakfast, and taking walks with Carrie. Dan was a patriot with a deep love for America and American Football, proudly sporting his Green and Gold in support of the Green Bay Packers; GO PACK GO!, as well as the Wisconsin Badgers, GO BUCKY!
Survivors include his wife, Carrie Coonan, of Georgetown, TX; son, Corbin Coonan, and Kelly Sanderson, of Milwaukee, WI; daughter, Kailyn Anderson and husband Paul, and three grandchildren, Arya, Emma, and Maximus of Savannah, GA; son, Samuel VanBeckum and Lauren Quill, of Amarillo, TX; two brothers, Tom Coonan and wife Margaret, nephews – David & Brad and niece – Carly, Milwaukee, WI, and Rick Coonan of Florida and nieces Kimberly and Stacey. He is also survived by 250 or more people who would swear until their dying day that Dan was their best friend.
One of Dan’s most memorable qualities was his ability to tell stories, as well as his contagious smile and laugh. We suspect he liked making memories because he liked telling the story even more. His love, generosity and kindness are irreplaceable and will surely be missed by all. If you have a memory of Dan you would like to share, please send it to: [email protected]
Celebration of life services will be held on Tuesday, December 14, 2021, from 3:00-6:00 PM in the Crystal Room at The Northland Hotel in Green Bay, Wisconsin.
In lieu of flowers the family asks that you support the Amarillo Chapter of Children’s Miracle Network, Dan spent the past three years volunteering his time to this phenomenal organization. To donate go to cmnamarillo.org click the “Donate Today” button, fill out the gift information page, selecting Designation “Children’s Miracle Network of Amarillo”, leave participant name blank, donation dedication select “in memory of” and enter “Dan Coonan”.