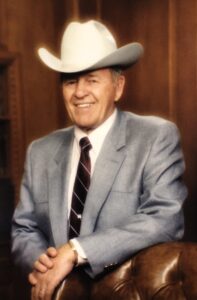 Memorial services will be held at 2:00 P.M. on Thursday, January 9, 2020 at the First Baptist Church in Hereford.  Private burial will be at Llano Cemetery in Amarillo.  Arrangements are by Boxwell Brothers Funeral Directors, 2800 Paramount Blvd.

Ed was born on May 25, 1931 in Emporia, Kansas.  He was raised on a farm north of Emporia with eight brothers and two sisters.   He married Millie Merry on February 18, 1951 in Emporia.  He worked for REA climbing poles and hanging wire and various other jobs before finding his true passion in life.  He won the Kansas City Royal on a cutting horse named Ready Money.  He joined with Jim Lowder to build and operate Cattleman’s feedlot in Emporia.  He ran Lubbock Feedyard before moving back to Emporia in 1968 where he built and operated Flint Hills Feedyard.  In 1975, Ed worked with the Crofoot family to establish the Barrett and Crofoot Feedlots in Hereford, Texas now owned and operated by his sons and grandsons fulfilling his lifelong dream.

The family will receive friends at the funeral home on Wednesday from 6:00 P.M. to 7:00 P.M. and suggest memorials be sent to the Alzheimer’s Association, 5410 S. Bell St., Suite 411, Amarillo, Texas 79109. Memorial gifts can also be made online at www.alz.org/westtexas with the honorary tribute name as Edward C. Barrett.