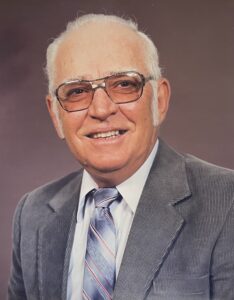 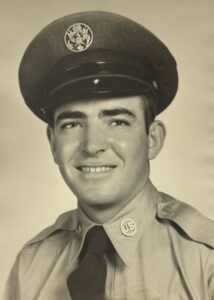 He was born October 15, 1930, in Minatare, NE to Dave and Alma (Britthower) Meyer.  Elmer attended school in Newell and Belle Fourche, SD.  He entered the United States Air Force in April 1951, serving in Su Wan, Korea.  He was honorably discharged in October 1953.  He went to work for the US Department of Helium, Bureau of Mines.  He worked 37 years before retiring in 1991.

Elmer met his sweetheart, Wilma Anderson in Amarillo while stationed at Amarillo Air Force Base.  They married in February 1952 and were married 50 years until Wilma passed away in February 2002.  Together they raised two wonderful daughters, Shelley, and Debra.  His favorite past time was watching or listening to baseball while he was piddling in his backyard shop.  He loved to work on small engines and motors to pass the time.  Elmer played golf on a league during his younger days and placed in three tournaments he was so proud of his trophies.  He enjoyed his grandchildren very much.

He was preceded in death by his wife, Wilma, in 2002; daughter, Debra Ruth in 2007; son-in-law, William King in 2017; parents; brothers, Robert Meyer and David Meyer; and sisters, Mary Jane Meyer, and Dorothy Thornburg.

The family wishes to acknowledge the love and care that Elmer received while living the last 13 years at Ussery Roan State Veterans Home, here in Amarillo, TX.