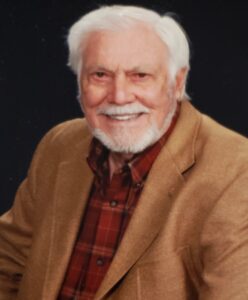 Gail Eugene Binkley Sr., 91, of Amarillo, TX peacefully passed away on Father’s Day, June 16, 2019. He was born in Coffeyville, Kansas on October 2, 1927 to John and Eva Binkley. Gail was a devoted and loving husband, father, grandfather and great-grandfather.

While attending the University of New Mexico in 1951 he met the love of his life, Gleeana.  It was love at first sight. Gail never tired of telling people about the first time he saw Gleeana and took her hand.  He loved that beautiful gal and they had quite a love story! The happy couple married and moved to Amarillo.  After working for Floyd W. Richards for 18 years, Gail started Binkley Incorporated and completed numerous commercial projects throughout the Texas and Oklahoma panhandle.

Gail instilled the value of hard work and ethics in his children. He was always working on something, even while on vacation.  He passed on his love of babies, and that it’s ok for music to move you to tears.

Gail was preceded in death by Gleeana, his brother John, and sister Betty. He is survived by his son Gail Jr. “Bink” and Cindy Binkley of Amarillo, daughter Glee (Randy) Everett of Vancouver, Washington, the grandchildren he adored, Gail Binkley III “Tres” and John Charles Binkley “Chas” (Kristen) of Colorado, Andrew Everett (Lindsey) of Vancouver, Washington and Eva Everett of Mesa, Arizona, and 4 great grandchildren. He is also survived by his brother-in-law, 3 nephews and a niece. His grandchildren would tell you that Grandad and Maw supported them wholeheartedly by being present for their artistic, musical, athletic and educational endeavors. They were wonderful grandparents!

Gail is also survived by dear friend, Jim Baker, his birthday buddy and best friend since childhood. They set an excellent example of the value of friendship.

Gail was a member of Westminster Presbyterian Church.

Heartfelt thanks to BSA hospice and Ussery-Roan for their compassionate care. The family requests that memorials be made to BSA Hospice of the Southwest.