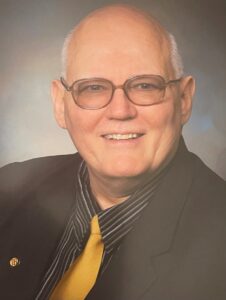 Mr. Gary Biggers was born in Hobart, OK, lived all over the world, and eventually arrived at AHS where he graduated in 1964. While at Amarillo High School, Mr. Biggers was a member of the Dukes of Sandieland, the jazz band, the tuba player in the orchestra, and the tuba section leader in the band. He represented Amarillo High School in All-State Band and was 6th chair out of 26. He graduated with a bachelor’s degree in English and Biology in 1968. Mr. Biggers also completed his master’s degree in English in 1970.

Following the completion of his master’s, he served in the Army as an Executive Officer of a 155 Howitzer battery and Adjutant of the 1/92nd Field Artillery Battalion during the Vietnam War era. After his service in the Army, he taught English at Crockett Middle School and at Tascosa High School before arriving at Amarillo High School, where he taught for thirty-four years. While at AHS, he developed curricula for junior and senior English, vocabulary, humanities, reading improvement, consumer English, and film analysis as well as sponsored the National Honor Society, Key Club, and the Creative Writing Club. Mr. Biggers also started the AHS Academic Decathlon team, which won the right to compete at State. As an adjunct professor at WTAMU, for twenty-four years he instructed many Amarillo High School students in comparative cultures, culminating in a summer tour in Europe with college credit.

Mr. Biggers was the recipient of many teaching awards including The Texas Excellence Award from the University of Texas, AHS Teacher of the Year twice, and AISD and Regional Teacher of the Year. In 1992, he was included in Who’s Who Among American Teachers. He is also responsible for writing Amarillo High Schools’ application to offer the International Baccalaureate Program. He served as the International Baccalaureate Coordinator and founded the International Forum. Mr. Biggers served as the caretaker of the AHS Art Collection since 1988, which is one of the top public high school art collections in the nation. Mr. Biggers and the Rehm Family bestow the “Passion for Learning” Scholarship, annually awarded to a college-bound senior.

Mr. Biggers’ contribution to Amarillo and Amarillo High School will forever be remembered and valued. Without him, the school would not have the burgeoning art collection that is nationally ranked and would not be the only International Baccalaureate school in Amarillo. The impact Mr. Biggers made on Amarillo High’s students and faculty is hard to measure, but he will be remembered as being one of the most influential teachers in the history of Amarillo High School.

Please use this link to view the funeral via livestream: https://www.facebook.com/BoxwellBrothersFuneralDire…/live/