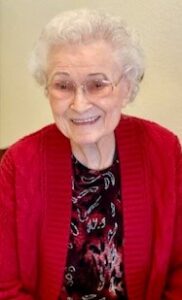 Josephine Towery was born December 7, 1927 in Lipscomb County, TX to Elizabeth Kappel Appel and David Appel.  She graduated from Higgins High School as valedictorian in 1945.    She received numerous scholarship offerings including WTSU, Texas Tech, and University of Oklahoma as well as Draughon’s Business College.  She chose Draughon’s Business College in Wichita Falls, TX.   Upon completion she moved to Amarillo, TX to work at General Mills.  She then worked for Randall County, retiring after 20 plus years of service as Deputy Tax Assessor Collector in 1990. She married Ocie Towery, Jr. on May 6, 1950 in Amarillo.   They remained in Amarillo and were married 62 years.    After retirement, they enjoyed traveling throughout the US with close friends as well as spending time with their grandchildren.

She was a member of Paramount Baptist Church and continued to live in Amarillo independently after her husband’s death until her health required her to move to Fort Worth, TX to be near her daughter, Nancy in October 2018.

Through her kind, gentle spirit, Josephine touched many lives personally and professionally.   Her greatest legacy is that she consistently demonstrated her faith and trust in Christ throughout her life, even in challenging and difficult circumstances.   She showed that same loving spirit to her husband, children, grandchildren, and great-grandchildren.

We are thankful to have had her for 92 years.  While we grieve for us in our loss, we celebrate her life and the fact that she is at home with her Savior and those she loved who have gone before her.     In lieu of flowers, the family requests donations to Faith City Mission, Paramount Baptist Church Amarillo, First Baptist Church, Keller, TX or your favorite charity.

Services are being arranged by Boxwell Brothers Funeral Home in Amarillo.   Individuals wishing to pay their respects to Mrs. Towery can visit Boxwell Brothers Tuesday afternoon and up until her graveside and memorial services on Wednesday, February 5, 2020.  Graveside services will be private before the memorial celebration of her life, which will be in the Boxwell Funeral Home Chapel, 2800 Paramount Boulevard at 2 PM led by Reverend Lance Herrington, Senior Adult Pastor, Paramount Baptist Church.   Family will be available immediately following the service to greet friends at the Chapel.