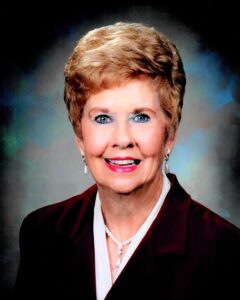 It is with heavy hearts that the family of Lloyd Dean Gower announce her passing on Sunday, May 10, 2020 at the age of 85. She was born on October 9, 1934, to Lloyd Clarence Byars and Irmadene Byars in Memphis, TX. She was named after both of her parents. She was in the graduating class of 1952-1953 from Amarillo High School. Lloyd Dean attended Amarillo College and West Texas State University.  Her professional career included that of being an Executive Secretary for Diamond Shamrock Oil Company.

Lloyd Dean met the love of her life, Richard Leroy Gower, in 1951. They were engaged on May 9th, 1952 and were married on September 28, 1952. Many have said that Lloyd Dean and Richard have had a “storybook marriage.”  In 1961 Lloyd Dean and her husband, Richard, were transferred to El Paso, Texas where their 2 children, Todd and Diane were born.  They returned to Amarillo Texas in 1964. Lloyd Dean co-founded Gower & Company insurance with her husband in 1970.  She was a Board Member of the PTA for Belmar and Crockett schools.  She also enjoyed her Ladies Friday Bridge Club at the Amarillo Club.  She was also a member of the HOSTS for teaching and did TAAS test tutoring for 3rd graders. She was also a member of Republican Women of The Panhandle. In her spare time, she enjoyed, playing tennis and golf. She loved her shopping trips with her daughter and granddaughter. Lloyd Dean put her heart and soul into everything she did. She had a passion for making all children feel loved and special.

Lloyd Dean and Richard are members of St. Paul United Methodist Church and the Covenant Sunday School Class. Lloyd Dean loved to travel, visiting nearly every state in America. In addition, she enjoyed several European and Caribbean vacations with her family over the years. Lloyd Dean often said, “Whatever happens in the future, I have had the most wonderful life that a person could have”. Lloyd Dean, indeed, loved all people — and, all people loved her.

Lloyd Dean is survived by her husband Richard of 67 years of marriage. Also, surviving are her children, Todd Douglas Gower and Diane Gower Moran of Amarillo, TX; and her grandchildren, Lindsey Jordan Larned and husband Jeffery Larned, Tyler Douglas Gower and Thomas Alexander Gower and wife Kylie Gower. She has two great-grandsons, Logan Wyatt Larned and Layton Dean Larned. She is also survived by her sister DeRema Belle Sears, and husband Rene D Sears. She is also survived by many nieces and nephews. Lloyd Dean was preceded, in death, by her father Lloyd Clarence Byars and her mother Irmadene Byars; and her brother E. Duane Byars.

Viewing will be Wednesday, May 13th from 10 am -8 pm at Boxwell Brothers Funeral Home. The family will have a private graveside service at Llano Cemetery on Thursday, May 14th.  In light of Covid-19, the memorial celebration of life for Lloyd Dean Gower will be held at a later date.

The family would like to thank BSA Hospice of the Southwest and Ruby Slippers for their compassionate care.

In lieu of flowers, the family asks for donations in her name to be made to St. Paul United Methodist Church, Amarillo Wesley Community Center, Wildcat Bluff Nature Center, or the Alzheimer’s Foundation of America.