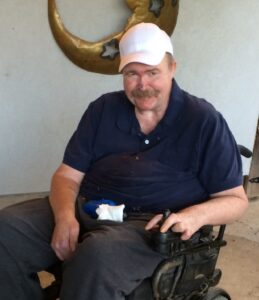 Michael married Pamela Kay Nelson on June 14, 1974 and they recently celebrated 46 years of marriage.  Their son, Shane was born June 14, 1977 on their 3rd anniversary.

Michael enlisted and served in the United States Marine Corps from 1973 to 1980 as an aircraft hydraulic/pneumatic mechanic where he reached the rank of Staff Sergeant.  He graduated from Amarillo College in 1989 with an Associate Degree in Business Administration and from West Texas A&M in 1993 with a BBA in Accounting.

Michael was preceded in death by both parents. He is survived by his wife Pamela, his son Shane and his fiancée Mandi Medley, grandsons Austin, Keeton and Levi, and his brother Ricky Eastep of Odessa, Texas.

Graveside services will be at 2:00 P.M., Monday, November 9, 2020 at Llano Cemetery.  Arrangements are by Boxwell Brothers Funeral Directors, 2800 Paramount Blvd.