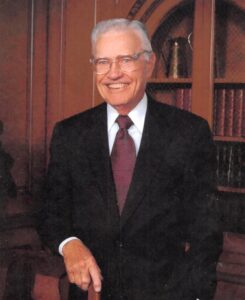 Tom was born November 12, 1919, in Penelope, Texas, the second son of James L. Morris and Alice B. Morris.  The family moved to Maypearl, Texas in 1920, and Tom graduated from high school at Maypearl in 1937.

He attended junior college at North Texas Agricultural College in Arlington, and entered the University of Texas Law School at Austin in September 1939.  During his senior year and shortly after Pearl Harbor, he was called into the United States Navy Air and served from January 2, 1942, until October 1945, when he was discharged with the rank of Lieutenant Senior Grade.  From December 1943 until his discharge, he served with Air Group 80 and flew the Hell Diver SB2C and the Hell Cat Fighter F6F from the USS Ticonderoga and the USS Hancock.  When he was discharged, he was flying the Corsair F4U4 Fighter Bomber, preparing for the invasion of Japan.

After discharge, he returned to the University of Texas Law School to complete his senior year and graduated in June 1946.  In Law School he was a Quiz Master, was admitted to Chancellor’s and Order of the Coif and was an Editor of the Texas Law Review.  Upon graduation he was elected to the faculty of the Law School and taught for two years.  During those two years he developed and taught the first course on Legal Argument and Writing and taught in the newly-organized “Equal but Separate” Law School for black students.

Upon leaving the faculty in 1948, he began his law practice in Harlingen, Texas, and he moved to Amarillo in September 1949.  On April 1, 1950, he joined the firm of Gibson, Ochsner and Little (which later became Gibson, Ochsner and Adkins) and practiced in that firm until September 2003, when he joined the Underwood Law Firm, where he was practicing at the time of his death.

His law practice brought many achievements and honors.  Perhaps his greatest achievement was his victory in 1966, in the United States Supreme Court in the landmark case of Graham v. Deere, which established the law of non-obvious subject matter in patent cases, and remains the law today after 55 years.  That case was reaffirmed by the Supreme Court three times in recent years and it has been cited in more than 30,000 cases and legal articles.  He has argued and won many cases in the Texas Supreme Court, the Texas Courts of Appeals, and the United States Court of Appeals for the Fifth Circuit.  He was admitted to practice in the United States Courts of Appeal for the Fifth Circuit, the Sixth Circuit, the Ninth Circuit, the District of Columbia Circuit and the Federal Circuit.

Tom had three passions:  first, his beloved family; second, the legal profession and his law firm, and third, the game of golf.  The latter needs a little special attention.  Golf became a passion when he had his first lessons from Harvey Penick in 1946 and broke 90 that summer.  He ultimately earned a single-digit handicap, which he carried until old age broke it up.  He had five holes-in-one, shot 67 at age 67, shot 79 at the Old Course in St. Andrews, 79 at Augusta National and par 72 at Broadmoor East in Colorado Springs.  He played in the Texas Tri-State Senior Golf Association tournament for many years, was president for one term and received the Colonel Bogey Award twice.  Most recently, he was honored by the Amarillo Country Club for more than 60 years of service in improving the Golf Course and a plaque in his honor appears on the Starter’s Shack at the First Tee.

Funeral services will be graveside rites only in Llano East Cemetery at 10:00 a.m., Saturday, October 9, 2021.

Special thanks and gratitude to the blessing and his caregiver Brian Raef.